Top
ArticleCity.comArticle Categories Tahiti Vs Moorea: Can You Spot The Difference Between These Two French Polynesian Islands?

Tahiti Vs Moorea: Can You Spot The Difference Between These Two French Polynesian Islands?

They’re so close, they’re like family. In fact the tiny atoll of Moorea is often referred to as the little sister of neighboring Tahiti.

So where are they? You’ll find them both in French Polynesia in the South Pacific. Tahiti and Moorea are roughly around 4,400km south of Hawaii, 7,900km from Chile and 5,700km from Australia. 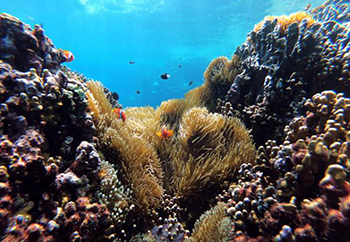 Tahiti is the largest island in French Polynesia, divided into Tahiti Nui (the larger, western section) and Tahiti Iti (the eastern peninsula). You might remember Tahiti as the location for the 1962 film Mutiny on the Bounty with Marlon Brando, firmly cementing its reputation as an idyllic, desert island.

Often described as Tahiti’s little sister, Moorea shouldn’t be overlooked. Eight mountain peaks rise from its lagoon, while from overhead the island is roughly shaped like a heart – in keeping with its appeal as a top honeymoon destination.

Moorea is just 10 miles (16km) across, and is dominated by its highest point, Mount Tohivea. It dominates the view from the two small bays on the north shore and can be seen from Tahiti. In Moorea’s north Mount Rotui overlooks picturesque Opunohu Bay and the settlements around Cook’s Bay. Inland, hiking trails wind through rainforest on the slopes of Mount Tohivea.

Moorea is part of the 118 islands and atolls that make up French Polynesia’s Society Islands archipelago and is a haven for divers who will love the mix of colorful corals and the variety of marine life.

While we’re on the subject of tropical islands, did you know Fiji is another contender for Robinson Crusoe-inspired vacations? Also in the vast South Pacific, Fiji is 4,000km west of Moorea, north of New Zealand and east of Australia. Fiji is an archipelago of 333 islands and 540 islets offering beaches backed by palm trees and crystal-clear waters, perfect for snorkeling and diving.

So when it comes to comparing Tahiti vs Moorea, where do you start? 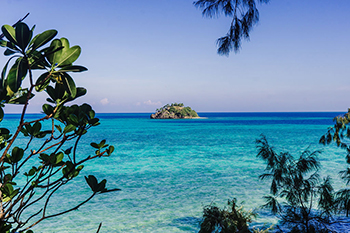 Think of a tropical island and you’ll naturally associate it with honeymoons. Newlyweds who choose a Tahiti or Moorea honeymoon can be assured their vacation will be packed full of romance and adventure.

Tahiti and Moorea both offer the chance for new couples to hide away, gaze into one another’s eyes and enjoy romantic dinners for two and spa treatments. But once you’ve gazed enough – you’re going have the rest of your lives together after all – there’s plenty to do on Tahiti and Moorea to keep you entertained.

As well as astounding natural beauty, and a jumping off point for other more remote islands like Moorea and Bora Bora, Tahiti does offer things that Moorea doesn’t. Given it’s the largest island in French Polynesia, Tahiti is the best place to go for shopping, especially if you’re looking for the Tahitian Pearl. There are also some great walking tours of its city, Papeete, and more authentic street food. Tahiti also offers great nightlife for honeymooners looking to celebrate into the early hours.

Away from the city, Tahiti offers that quintessential south-seas experience of seclusion and astounding natural beauty thanks to its circle of majestic peaks, with trips to waterfalls and lagoons.

For beach lovers, there’s a choice of white and black sand. Plage de Toaroto is a beautiful stretch of white sand and a great spot for swimming and snorkeling, as is La Plage de Maui on Tahiti’s southern shore. A quirk of Tahiti is the island’s many black sand beaches, due to the island’s volcanic activity. Lafayette beach is one of the best black-sand beaches on Tahiti.

And for surfers, there’s the well-known Teahupoo Lagoon where the world’s best surfers come to test their skills on the island’s famous sharp reef breaks.

Inland Tahiti does a good line in jungle trekking, hiking and swimming in waterfalls. A popular trek for experienced hikers is to Aorai Mountain and a trip to nearby Moorea will offer up lots of waterfall trails, including the beautiful Afareaitu Waterfall, which is tucked behind mango trees and ferns.

Moorea meanwhile soars out of the water in an explosion of green. A visit to Bora Bora will appeal to honeymooners with its blue and green lagoon, white-sand beaches and Mount Otemanu piercing the sky.

Moorea is just 10 nautical miles from Tahiti and easily accessed by ferry or plane from Papeete, which makes it a top spot for couples, families and locals. And despite its popularity and presence of a few international hotel brands, Moorea still retains its small island feel.

Moorea’s main attraction has to be its natural beauty. The island is the remains of an ancient, half-eroded volcanic, and has eight dramatic mountain peaks that rise magnificently from its turquoise lagoon, creating a distinctive silhouette from the western coast of Tahiti.

If you’re looking for natural beauty and a chance to experience local culture, have you considered Fiji and her islands? Also in the South Pacific, Fiji has lots to offer newlyweds, from private dine outs and group dinners, to village visits, horseback riding, private beaches and plenty of culinary creations accompanied by Fijian music. 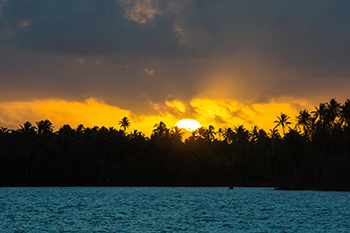 When it comes to tying the knot, there won’t be much difference between a Tahitian vs Moorea wedding. Both islands will use their natural assets to their best advantage – we’re talking wedding photos with serious wow factor, showing off Tahiti and Moorea’s stunning beaches and dramatic mountain peaks.

In Tahiti, beach ceremonies can take place with the iconic Mount Otemanu as the backdrop while there will be chapels with glass floors with views into the crystal-clear lagoon below.

Expect to find the bride’s villa to be decked out in tropical flowers and the ceremony to be accompanied by traditional Tahitian dancers.

If you’re looking to tie the knot on nearby Moorea, then expect romantic beach ceremonies, accommodation in overwater bungalows and a beach dinner with wedding cake. Additional activities can include couples spa treatments, 4×4 safaris, jet-ski excursions on the lagoon and lots of snorkeling.

In Moorea you can even get married in a recreated traditional Polynesian village, set on the edge of a lagoon or in a temple (marae) overlooking the beach. The wedding will be conducted by the high priest of the village to the rhythm of ukulele and traditional songs. 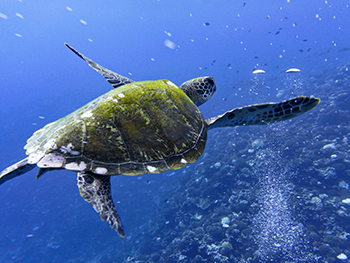 The best time to visit Tahiti and Moorea is in winter, between May and October, when the temperatures are at their highest and there’s the least amount of rain.  And when we say ‘winter’, we’re not really talking cold weather! Winter is also known as the dry season with temperatures ranging from 19°C – 29°C.

The wet season runs from November to April and sees temperatures still sitting at a comfortable 22°C – 33°C.

Between June and August the weather is at its driest and temperatures are in the high 20s to the mid-30s. However, this can be quite busy, so the months either side can still see comfortable temperatures but with lower prices.

Moorea – and the rest of French Polynesia – can be visited all year round, but there are likely to be more tropical showers between the months of November to April.

In Tahiti the best weather can be found in the dry season, from May to October. From November to April temperatures rise and you can expect a bit more rain, making it humid and wet. 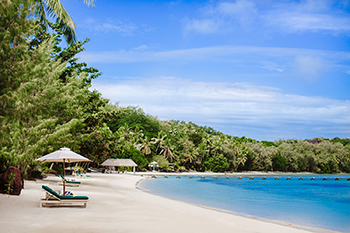 If you’re already looking at the South Pacific for your next vacation, then why not take a closer look at Turtle Island Fiji? This is a truly private island located in Fiji’s remote Yasawa Islands. Offering barefoot luxury and total seclusion, Turtle Island Resort is shared with just 14 other couples, making it feel like you have the place to yourselves.

Get in touch today to start planning your next vacation to Turtle Island.