The mention of Staples Center doesn’t elicit nostalgia, nor does it come accompanied by a snappy nickname, but it certainly is one of the busiest arenas in the U.S., as one look at parking and seating situations on an event night can often attest.

Staples is the only building in the country that is home to three teams in the NBA and NHL — the Lakers, Clippers and LA Kings — and nearly annual home to such big events as the Grammys.

In other words, there’s almost always something big going on at Staples Center, and whenever there is, downtown Los Angeles is usually hopping along with it. Thanks to the nearby LA Live entertainment complex, the area comes alive on game nights, with the crowds getting larger depending on the importance of the event.

Staples Center, operated by entertainment giant AEG, has seen a lot in its two decades of holding marquee events. NBA titles and Stanley Cups have been won within its walls — the Lakers have won five of the former there, while the Kings won two of the latter — and All-Star Games in both leagues have been staged there.

The Lakers, Clippers and Kings continue to bring capacity crowds to Staples Center, no matter how each team is doing, while the WNBA’s Sparks keep the arena busy during the summer months (and have hung a few banners of their own on the walls).

Even though the Clippers are working on building their own arena in nearby Inglewood and moving out from beneath the shadow of the Lakers, there will be plenty of other events to keep Staples busy after their departure. And in line with the arena’s 20th anniversary, a renovation is planned that should bring updates to what is already a modern live sports experience.

As Staples Center matures it remains popular as ever and a great place to watch events of any type.

Getting to the arena

Staples Center is a hard building to miss, even amid the tall buildings of downtown. The distinctive glass facade, sloped roof and purple hue are easily distinguishable in the night sky, and it occupies some prime real estate near the intersection of Interstates 10 and 110 (more commonly known locally as the Santa Monica and Harbor freeways, or simply “the 10” and “the 110”).

With the L.A. Convention Center, the downtown core and more and more attractions popping up nearby, the South Park neighborhood in which the arena is located is a popular place. And with popularity comes traffic — well, that’s true just about anywhere in the Southland, but especially downtown on the night of an event at Staples Center, as parking can be at a premium.

So if you don’t want to miss tipoff or puck drop, leave early and bring your patience. The most popular approaches are the downtown exits off the 110 and northbound on Figueroa Street, which runs along the east side of the arena.

If the idea of parking at Staples Center seems daunting to you, an underrated, but ever-popular, approach is by using Metro, L.A.’s slowly expanding subway system. The Pico station, serving the A and E lines (recently rebranded from the Blue and Expo lines, respectively), is one block away from the arena, but the station platform can get uncomfortably crowded during big events.

If you don’t mind the walk and if you happen to be using the B Line (formerly Red Line) anyway, just exit the system at 7th Street/MetroCenter and walk four blocks south. You’ll still run into crowds, but at least that station is large enough to handle them.

Popular parking spots for Staples Center are in the L.A. Live complex just north of the arena ($26 to park there), in the Convention Center structures and in private structures two or three blocks east — you’ll find the biggest bargains the farther east you go.

A handful of small parking lots operate just west of the 110 Freeway, on the other side from where Staples Center is located, as well.

Things to do around the arena

A large number of sports fans spend their pregame time at L.A. Live, the complex with the huge outdoor TV screens on the other side of 11th Street/Chick Hearn Way from the arena. In fact, the pedestrian traffic is usually so large that 11th Street is closed to traffic in the hours before most games.

Also, note that the L.A. Live area tends to host a lot of events itself, particularly at the Microsoft Theater, which usually explains why huge crowds can form along 11th Street even if Staples Center’s capacity crowd has mostly made its way inside. You’ll sometimes have to be mindful of security barriers set up to help with pedestrian traffic flow.

Whether you’re there to eat, drink or just people-watch, there are plenty of restaurant and bar options, from casual (Tom’s Urban, Yard House) to upscale (Wolfgang Puck, Katsuya).

There’s also a JW Marriott within this complex in which fans tend to congregate postgame (and, occasionally, players and other sports personalities as well). Your options are plentiful, but this being L.A., don’t expect any of them to be cheap.

If you’re looking for a bargain or to keep it simple, try heading a few blocks north or east, where you’ll find more fast food or at least casual options.

Oh, and if the event you’re attending happens to be in the daytime and you’re looking for breakfast beforehand, there’s an L.A. institution called The Pantry two blocks north on Figueroa that is VERY popular with the sports-attending crowd. The fare there defines “greasy spoon,” though. 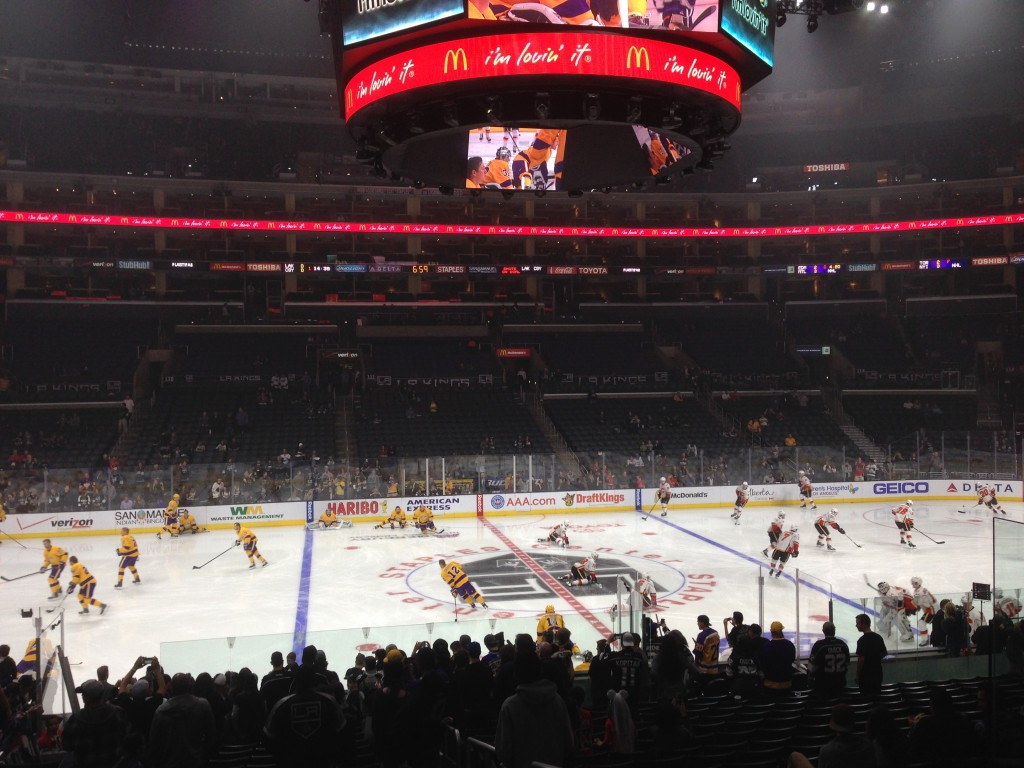 Watching a game at Staples Center

Perhaps befitting an events venue in L.A., Staples Center is quite flashy on the outside. If it’s your first visit, be sure to visit “Star Plaza” on the arena’s north side, with its ever-growing collection of statues — Magic Johnson, Wayne Gretzky and Oscar de la Hoya, among others, are represented there. However, note that this also tends to be the most popular entrance, meaning it can get jammed up as gametime draws closer.

Once inside, there’s not a whole lot flashy about the arena — but management seems to be trying to change that. Expect plenty of changes in the years as Staples Center embarks on a refresh spurred by its 20th anniversary.

If your seat is on the 300 (upper) level and it feels high compared to other arenas, you’re probably right. One of the more distinctive features of Staples Center’s seating bowl is its three levels of luxury suites, but the trade-off is that the upper deck is pretty high. Your first clue to that is the two sets of escalators you have to ascend to reach the 300 level, and you can get a glimpse of the club seating level (known at Staples Center as the Premier level) on your way up.

The good news is that it’s not too far back — in fact, if it’s your first visit to Staples Center and you’re in the lower rows of the 300 seating level, it might feel to you as though you’re right on top of the ice/court.

Though the Lakers have been the marquee tenant since the arena opened, the Kings and Clippers have been making inroads into making the place their own as well.

The Kings are farther along, having won two Stanley Cups in a three-year span and building on their loyal fan base, and they’ve made one side of the Staples Center seating bowl their own by hanging their championship banners and retired numbers from the rafters, away from the Lakers banners that dominate the wall on the other side.

Meanwhile, the Clippers add their own touch by covering the Lakers banners with custom-made decorations for their games.

Food and drink at Staples Center

Staples has added more adventurous concessions options over the years and has begun to phase out some of the more bland options, which in the past included McDonald’s and California Pizza Kitchen. Goose Island Brewery is a nice touch, and the Ludo Bird fried chicken stand, operated by celebrity chef Ludo Lefebvre, is an upscale take on chicken tenders.

In addition to Goose Island, Southern California brewery Golden Road also operates a stand on the main concourse level, and their beers are on draft at stands throughout the arena.