Top
ArticleCity.comArticle Categories Before Your Treatment: Facts About BOTOX® You Should Know

Before Your Treatment: Facts About BOTOX® You Should Know

Much has been written about the benefits of BOTOX®. Treatments are easy and fairly painless, with recovery times so quick you can pop into your local MedSpa during lunch and be back to work within the hour.

However, very few professionals outside of the health and beauty industries could tell you exactly what’s in BOTOX® or why and how it works. Whether you’re considering treatment or just curious, here are some facts about BOTOX® to ease your mind.

The Beauty of Accidents: How BOTOX® Cosmetic was Discovered

The initial intended application for BOTOX® was as a treatment for muscle spasms around the eyes (strabismus) and twitchy eyelids (blepharospasm). It was during treatment that the brand’s Chief Scientific Officer, Dr. Mitchell Brin, noticed a significant side-effect: the relaxation of the muscles around a patient’s eye also caused a softening effect of fine lines and wrinkles! The subject then requested that he apply the same treatment to the other eye, and the difference in her appearance was staggering.

After further research, experimentation, and development, this injectable wrinkle treatment was finally approved by the FDA for non-medical clinical use in 2002. That approval was specifically for use in reducing the appearance of crow’s feet and severe glabellar facial lines and creases. Glabellar lines are those deep furrows that appear between your brows and on your forehead.

What is BOTOX® Made From?

The type of BOTOX® that’s used for facial treatments is one of seven variations of a neurotoxin called Clostridium botulinum, which was first identified in 1895. This is a form of the same substance that’s responsible for botulism poisoning, which led to unfounded fears when the cosmetic variety was first introduced.

The injections themselves contain a very small amount of a purified protein from the botulinum toxin. The bacterium strain botulinum neurotoxin type A is cultivated in a lab, where it is then processed and purified to remove the toxic part and leave the raw protein.

Very little of the purified protein is needed to be effective. In fact, just one gram of this substance in its pure form could keep the world in BOTOX® Cosmetic for an entire year. That makes it a very cost-effective and plentiful anti-aging treatment.

Each packaged unit contains between 50 – 200 units (U) of the active ingredient, depending on its intended usage. When treating migraines, the formulation would be on the higher end of the spectrum. Clinical use for wrinkle reduction would veer toward a smaller amount.

The protein can be used alone or mixed with other ingredients that are freeze-dried and vacuum-sealed to preserve the mixture until it’s needed. High-grade BOTOX® uses no preservatives either in production or storage.

Formulations may vary, but each unit of the vacuum-dried form of injectable BOTOX® contains:

It’s then reconstituted in a clinic or MedSpa using a solution of non-preserved saline solution that contains 0.9 percent of sodium chloride. For treatment of facial lines and wrinkles, a concentration of 5U per 0.1mL of saline per injection is used. 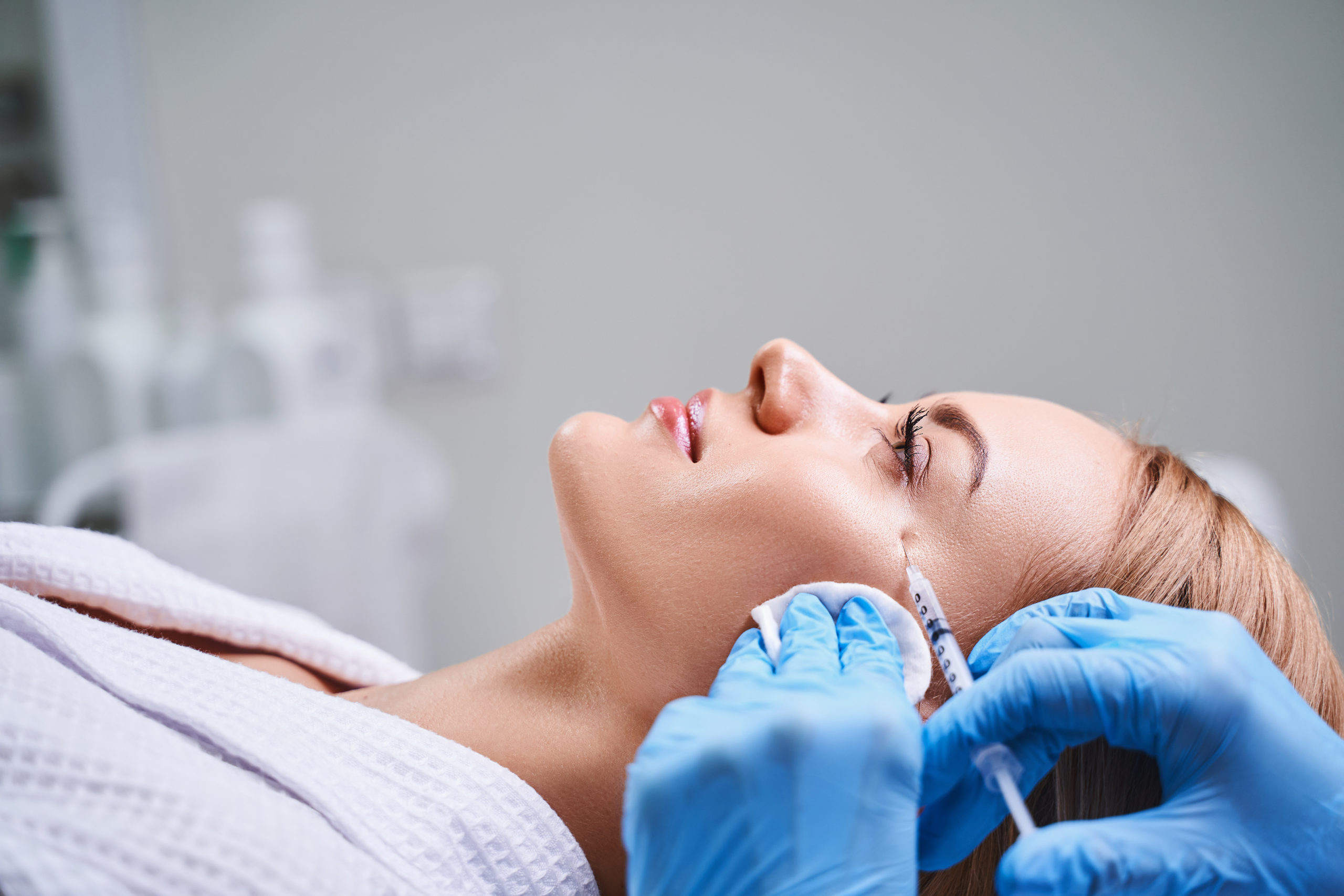 According to a report released by the American Society of Plastic Surgeons, there are approximately 7.4 million injections of some formulation of BOTOX® cosmetic each year. It’s only available by prescription or use by a licensed clinician but is generally considered safe and effective.

Contrary to popular belief, it doesn’t paralyze the muscles when used in recommended dosages. It does cause relaxation of muscles and glands in the targeted area by blocking the release of acetylcholine, a chemical in the nervous system that tells your muscles when to contract. The effects are temporary, lasting about 3 months to a year, The length of effectiveness depends on the type and location of treatment.

In addition to frown lines and forehead creases, injectable cosmetic BOTOX® can reduce the appearance of:

In 2021, a review of all substantive clinic studies found that BOTOX® cosmetic was safe and produced relatively mild symptoms in some people.

Most side-effects were mild and disappeared within hours of treatment. More severe side-effects are rare and usually related to certain medications or underlying conditions that affect the nerves or muscles, such as ALS, Lambert-Eaton syndrome, and myasthenia gravis. Before taking any treatment, consult your doctor about potential risks based on your own medical history.

Although the most popularly known application for BOTOX® is as a cosmetic treatment for facial lines and wrinkles, it’s used very effectively to treat a range of health conditions.

Some of these medical applications are safe for children as young as two, but most are for ages 12 and older. The most common medical uses include:

Don’t let the origins of BOTOX® worry you. It’s an amazing substance that’s used to address a number of cosmetic and health concerns. When properly formulated and applied by a trained aesthetician or medical professional, it’s also highly safe and effective.