Stallion Dynasties: A new series from Past the Wire by Kaitlin Free:

Past the Wire is proud to introduce to you our newest column, Stallion Dynasties.
Stallion Dynasties is an in depth look at some of racing’s greatest stallions and their successful sons that have carried on their legacy. This series will be a long term project with many installments and will follow US and international sire lines. Our first entry will start out with perhaps the greatest stallion of them all, Northern Dancer. 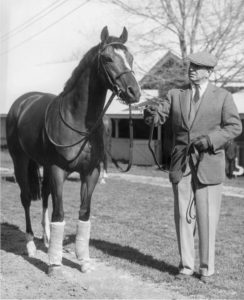 (around $600,000 in today’s market) at a yearling sale but there were no takers. He stayed with
his breeder E.P. Taylor, owner of Winfields Farm. Ten years prior Taylor had bred the stallion
Nearctic after purchasing his dam in foal to the great Nearco. He paired Nearctic with the Native
Dancer mare Natalma and produced what he thought would be one of his best crosses yet. He
was meant to stay where he was created and his flagship success would define Taylor as an
owner and breeder.
Northern Dancer asserted himself to the racing circuit out of nowhere as a 2 year old. His career started with young apprentice Ron Turcotte on his back, a jockey that would later pilot several other future stars, including Secretariat. After breaking his maiden, Turcotte explained that the horse could run on any surface and could handle any scenario. This was a bold horse that was wise beyond his years.
Northern Dancer’s achievements as a juvenile earned him the 2 year old male championship in
his native Canada.
The small bay’s fast track to stardom had just begun, as many know he danced every dance as
a 3 year old. Northern Dancer was the first Canadian-bred horse to win the Kentucky Derby at
the time of his victory, and was in an illustrious club going for the Triple Crown. After rolling
home to win the Preakness, Northern Dancer came up short and finished third in the Belmont
Stakes to Quadrangle after lacking his usual speed coming home. Not to deny his fans
excitement back home, Northern Dancer went on to capture Canada’s crown jewel after his
Triple Crown attempt. When the small bay ran in the Kentucky Derby, jockey
Willie Shoemaker was given the choice to ride him or the favored Hill Rise. Shoemaker chose Hill Rise.
Bill Hartack was given the mount on Northern Dancer.
“He remains the only horse to capture both the Kentucky Derby and
Queen’s Plate.”
After two stellar seasons of racing, Northern Dancer retired with a record of 14 wins in 18 starts
and never finished worse than third. He captured America’s champion 3 year old colt title and
was voted Horse of the Year in Canada. Despite losing in the Belmont, his date with immortality
on June 4, 1964 was declared ‘Northern Dancer Day’ in Canada. He and his owner, E.P. Taylor
were presented with a carrot shaped key to the city of Toronto. Northern Dancer thanked his
fans and hometown by eating his key!

Northern Dancer burst onto the scene as a champion race horse, but was set to explode like a 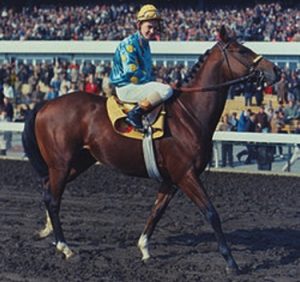 supernova at stud. No breeder or owner could ever predict that the small bay colt built like a
quarter horse would shape the very breed into his own.
Northern Dancer began his first season at stud in 1965 for a fee of $10,000 at Windfields Farm in
Ontario, Canada. His home farm was very accomodating to him, the small stallion had a special ramp used when he bred a mare that was larger than he was. Northern Dancer was officially
advertised as 15.2, but was really more like 15.0 or 15.1 at the very most. The little stallion
paired well with any mare of any line due to his exotic paternal blood.
While Windfields Farm in Ontario was home, Taylor had his sights set on bigger and better
things. He thought that Northern Dancer deserved the opportunity to breed with top US
broodmares and thus he purchased a 200-acre farm in Maryland in 1968. This new farm would
house some of Windfield’s stallions including Northern Dancer. Northern Dancer would remain
there from 1969 until his death in late 1990.
Northern Dancer’s first crop hit the track in 1968 and came out flat running. In his first crop he
sired 16 winners from 18 starters – 10 of them being stakes winners. The most impressive that
came from his first crop was the undefeated Canadian Horse of the Year Viceregal. Breeders
everywhere were taking notice of Northern Dancer’s first runners, but a horse in his second crop would really put Northern Dancer on the map.
After raising his fee to $15,000, Northern Dancer’s second crop was much anticipated. Most of
the horses that Northern Dancer produced ended up being the same size, shape, and color as
him. This super star colt would be the exception after growing to over 16.0 hands. Purchased for
$84,000 as a yearling, the colt that was named Nijinsky would forever change European flat
racing. Nijinsky soared to new heights and was the first horse in 35 years to claim the English
Triple Crown. Nijinsky was only defeated twice in 13 starts and was crowned European and Irish Horse of the Year. Nijinsky’s success along with the fast start that Northern Dancer’s first crop had ignited what was called the ‘Northern Dancer gold rush.’
Northern Dancer’s stud fee double nearly every 2 years. By 1978 he was standing for $50,000
non-refundable and there was no guarantee of a live foal. At age 20 a record $40 million was
offered to syndicate and purchase Northern Dancer. As long as E.P. Taylor was alive there
would be no deal to sell the prized stallion. He increased by $50,000 or $100,000 increments
until he was at $500,000 by 1984 at age 23. His last few years at stud he stood as ‘Private’ and
his fees were privately negotiated. Breedings sold those years were in excess of $1 million.
As times changed Taylor had a very real fear that someone could steal or sabotage Northern
Dancer. The kidnapping of Shergar started a frenzy of security ramp ups and changes at
Windfields Farm. Shergar was kidnapped just before his debut year at stud and was never
found. Taylor himself owned a share in Shergar. The stud barn and paddocks were soon
surrounded by chain link fences and the stallions were guarded 24 hours a day, 7 days a week.
Just years before the farm allowed visitors and racing fans from across the world to come take a
peek or a picture with the greatest stallion in the world.
All truly great stories and reigns of kings must come to an end. Northern Dancer begin to
experience heart trouble and arthritis at age 26 and was officially retired from stud duty on April 15, 1987. The Windfields Farm property was sold after the stallion was pensioned due to
declining revenue. E.P. Taylor passed away soon after. A special clause allowed Northern
Dancer to live out the rest of his life on the Windfields Maryland property.

On November 15, 1990 at the age of 29 Northern Dancer’s health further declined. He had come down with a severe case of colic and would need life saving surgery. The idea to take him up to Pennsylvania’s New Bolton Center was struck down out of fear he would not survive the trip to the center, let alone the surgery itself. Northern Dancer’s condition was worsening and he was visibly suffering. He spent one final night with his long time companion TV Commercial, and was euthanized the morning of November 16.

Northern Dancer was loaded in a large oak coffin that had secretly been purchased years ago
for the grand stallion. He was draped in a turquoise and gold blanket that he had won in his
racing years. That same day, his remains were refrigerated and vanned up to Windfields original farm in Ontario, Canada where he was born. Northern Dancer was buried whole.
Windfields was later sold to the University of Ontario and the holy ground was not cared for for
many years. Much of that time Northern Dancer’s grave was hidden underneath weeds and
gravel away from the public eye. The site was nearly lost and repurposed until a historical
society stepped in. 28 years to the day of his death, on April 16, 2018 Northern Dancer’s grave
became an official historical site under the Ontario Heritage Act. Funds were presented and his
grave will be cared for and landscaped from here forward.
The legacy of Northern Dancer will be felt as long as the thoroughbred is alive and well. As
verified by Jockey Club records, Northern Dancer sired 411 winners from 645 named foals, 147
of them being stakes winners. He dominated the stallion rankings in the US, Great Britain, and
Ireland through the 1970s and 1980s and was named Champion Sire in the respective countries
many of those years. Northern Dancer is also a Champion Broodmare Sire, his daughters
producing many stakes winners. Some of Northern Dancer’s best stakes winners and
champions include : Viceregal, Nijinsky, Sadler’s Wells, Secreto, Shareef Dancer, Lomond, El
Gran Senor, Nureyev, Try My Best, The Minstrel, Northernette, Lyphard, and Fanfreluche.
Northern Dancer’s progeny fetched some of the highest prices ever recorded as yearlings and
set records that may stand forever. At the Keeneland Yearling Sales, Northern Dancer progeny
led the average prices for 12 years straight. In 1984, 12 yearlings by Northern Dancer sold for a
record average price of just over $3 million (around $8 million in 2018 after adjusted for
inflation). Over his entire stud career, Northern Dancer yearling sold through Keeneland
amassed a total of over $160 million.
Northern Dancer’s son and daughters travelled and bred all over the planet. The stallion’s
dominance can still be felt greatly in South America, Japan, and Australia. Northern Dancer is
the original ‘Sire of Sires’ and his sons’ successes at stud coined the very term. His top sons at
stud include : Danzig, Sadler’s Wells, Nijinsky, Storm Bird, Vice Regent, Lyphard, Nureyev,
Northern Taste, Be My Guest, Dixieland Band, El Gran Senor, and Fairy King.
Northern Dancer himself never sired a winner of an American Triple Crown race, but his sons
carried his flag and made up for lost time. His sons sired winners of all three Classics :
Ferdinand, Gate Dancer, Louis Quatorze, Pine Bluff, Summer Squall, Danzig Connection, and
Go and Go. Northern Dancer created the greatest stallion dynasty known to man, and his
descendents still carry on. A few of his sons will continue this story in the Stallion Dynasties
series.