User Engagement: What It Is and Why You Might Be Measuring It Wrong

The secret to building a best-in-class company is simple:  Create a product which is so valuable that users engage with it as an essential aspect of their lives or work. So measuring user engagement is an important way to not only understand whether users find value in your product, but also whether you’re on a path to success.

The Importance of User Engagement

It’s important to put yourself in the shoes of a user when considering their engagement; today, there is a nearly limitless amount of content vying for users’ attention. As much as we would like to build products which users want to pour their lives into, the reality is that user attention is an increasingly limited resource.

That said, users who choose to spend their time in your product are sending your team an important signal. Not only is user engagement correlated with how users value your product, it’s also highly associated with your churn rate (more on that below).

Simply put: Users that value your product are more likely to renew their subscriptions, recommend your product to others, and upgrade into higher level offerings over time.

Conversely, users that don’t find value in the product likely won’t renew, recommend, or buy into your higher level offerings. Churn is a measurement of the percentage of your users who unsubscribe or stop using your product during a specific time frame (e.g. customers lost during a quarter or month by month). With more and more software products competing for users’ budget and attention, churn is an important way to evaluate the health of your user base and the success of your product. If a product has a high churn rate, it could signal that users are not getting value out of the product. A high degree of product engagement is the number one way to reduce user churn.

The most successful SaaS products achieve negative revenue churn. With churn being such a critical part of success, how do you consistently achieve a low churn rate?

Without fail, the number one way to reduce churn for your company is to have a highly engaged user population. Think of user engagement as anti-churn; an engaged user base does more than slow the rate of unsubscribes. It also increases up-sells and drives referrals of new customers.

In order to understand your users’ engagement within your product, let’s define the most common metric used for user engagement — a time-bound number of active users.

By far, the most widely used engagement metric is some form of temporal engagement metric (i.e. daily, monthly, or quarterly active users). The reason for this is simple – an ever growing number of active users is usually an indicator of product success. The actual time window which is appropriate for a product depends on that product’s reasonable engagement frequency. For example, in a product like TurboTax, daily active users likely doesn’t make sense given that tax season happens only once a year. On the other hand, a social media app like Instagram may focus primarily on daily active users as the temporal metric that makes the most sense.

The actual definition of what an ‘active’ user is can also vary greatly from company to company, or from product to product.

It’s important for a team to create their own unique definition of what is considered an active user when setting a baseline user engagement metric. That said, the majority of companies tend to set a fairly low bar when defining what an ‘active’ user is. For many, active simply means “has logged into our product” within a specific timeframe. A monthly active user (MAU), then, would simply be a user who has logged into a product in the last 30 days.

Some companies may use a more in depth or product-specific engagement metric to determine what active means. An active user could be determined by a user exceeding a certain threshold of time within the product. Or, it could be defined as a user interacting with specific product functionality within a time frame.

For example, imagine an app that provides flashcards to help students prepare for tests. Based on how this app is used, it might not make sense to define an active user as any user that logs into the app each week. Instead, a more product-specific definition of an active user for this flashcard app could be any user that has completed 10 flashcards this week. This is still a fairly low bar, but is much more intellectually honest than our default alternative of “has logged in”.

Whatever definition of active makes sense for your product, we recommend going beyond a simple count of “active” by establishing what we call an Engagement Funnel. The Engagement Funnel gives a more detailed and holistic understanding of the depth of engagement of your user base, while also providing you with clear goals on how to improve your user engagement over time.

The idea behind an engagement funnel is to divide your user population into different tiers based on their level of engagement with your product. Within your total user population, you’ll have an inactive tier and an active tier (using your definition of active). We then recommend taking it a step further by creating a third tier of users who are even more deeply engaged than your active tier of users. We call this tier your “engaged” users, and the definition of engaged is typically a product-specific threshold that implies more frequent or consistent use of your product than the definition you used for active.  With that out of the way, let’s create a sample engagement funnel.

Total number of users: The denominator. It’s simply the amount of all your users regardless of whether they are actively using your product or not. Your total number could only be your paying customers, or it could include both paying customers and free users (if you offer a free version). For this example, we’ll only use paying customers.

Active users: The user population that has reached your first threshold of engagement. For this example, we’ll use the standard definition of “has logged in” and set our time window as monthly. So, our monthly active users are all users that have logged in within the last 30 days.

With these two numbers, you can now calculate the percentage of your total user population that is actively using your product.

Engaged users: A group of users who have achieved some greater threshold of engagement in the product, beyond just logging in (or whatever your active user definition was). For example, a user that has logged in every week for the past month. Or, using our flashcard app again, has used 100 flashcards this month (vs the original ‘active’ definition of 10).

Using our 3 distinct user segments, the engagement funnel allows you to: 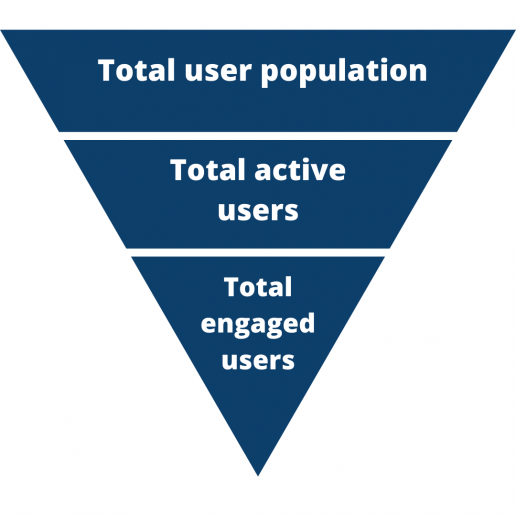 How Product Teams Can Use The Engagement Funnel

Many companies focus primarily on increasing their total number of users (denominator/top part of our funnel). While this is a good company-wide metric for growth as it is impacted by multiple teams such as marketing, sales, and customer support, it is not an actionable product team metric. Product teams should focus primarily on increasing the percentages of their total user population which are either active or engaged.

For example, say you have 10,000 total users. Of those, 10% of users are active. And of those 10% of active users, only 1% meet our engaged definition. Your engagement funnel would be:

Collaboration Qualified is Parlor’s version of an engaged user

By increasing the total number of users, without making any product changes, we can expect to have roughly the same percentage of users that are active and engaged (10% & 1%, respectively), and thus the same churn rate. Increasing total users doesn’t tell us whether we’ve improved the product experience and associated value that users get from the product. It just puts more users into our current engagement funnel.

By focusing instead on increasing the percentages of active and engaged users, product teams can more directly impact the value that users receive from the product, and thus the long-term health of their user population.

Developing an engaged user base is critical to the success of a product. While the nature of their specific product determines how a team measures user engagement, a more in depth measurement of user engagement, such as the Engagement Funnel, gives a better understanding of where product teams can focus their efforts to have the greatest potential impact on their companies’ success.