Alcohol use is often seen as a societal norm in the United States, and many people underestimate its dangers. Having a high tolerance for alcohol is something that should raise concern because it could indicate an alcohol use disorder or alcoholism. Alcohol can put you at greater risk for health problems such as cancer, heart disease, and liver disease, and also impairs your thinking and memory. Furthermore, alcoholism affects the entire family and can contribute to social, emotional, financial and legal problems. With such serious health risks, Crossroads created the alcohol addiction treatment center to support recovery in those with alcoholism. Learn more about our substance abuse disorder treatment in Maine. 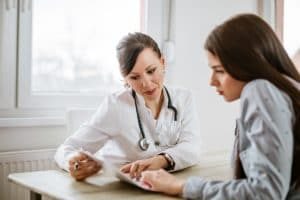 Some people use alcohol as a way to relax and unwind, while others use it to feel more outgoing and less inhibited in social situations. While it can be a temporary fix, understanding alcoholism requires one to know that it does not resolve underlying issues and can actually lead to more problems. Entering into an alcohol addiction treatment center, like Crossroads, can help you to address these issues and develop healthier coping skills and routines. In recovery, you will begin to see how much better you feel when not under the influence.

How Addictive is Alcohol?

A recent study found that alcohol is the second most addictive substance behind heroin. Alcohol increases dopamine production in the brain, which alters the brain’s reward system. Things that might normally bring you pleasure and satisfaction no longer have as strong an effect. Instead, your body craves alcohol to satisfy this need. Once you develop a dependency on alcohol, it can quickly spiral into alcoholism, making it even harder to quit drinking on your own. Even if you want to, the changes in your brain make it more difficult without professional alcoholism treatment and ongoing support. However, it is possible to overcome alcoholism and once again derive pleasure from things other than alcohol.

What are the Causes of Alcoholism?

Both genetics and the environment play a role in causing alcoholism. There is not one single factor that determines if you will become addicted or not. Prolonged or excessive drinking can put you at a higher risk of developing alcoholism due to the changes that it creates in the body and brain. Since every person and situation is different, there is no way to know for sure who will struggle with alcoholism and who will not.

People start drinking for a variety of reasons from boredom and experimentation to peer pressure, anxiety and self-medication. Alcohol abuse due to self-medicating may be an indication of another condition requiring Crossroads’ dual diagnosis treatment center in Portland, Maine. Being aware of risk factors can make you more alert to signs that may indicate your drinking is becoming problematic. If you do have a family history of alcoholism, it can make you three to four times more likely to develop a problem yourself, but being proactive can help you to overcome these odds.

What are the Signs and Symptoms of Alcoholism

Recognizing the signs of alcoholism can enable you to get yourself or a loved one the help they need to overcome addiction. Oftentimes people are in denial that they have a problem, especially if they have not noticed any major impact on their career, health or personal life. If there are problems, they may try to downplay the severity or make excuses to cover them up.

One major sign of alcoholism is being unable to control your drinking on your own. You may have tried to stop before but been unsuccessful or only lasted for a few days. Ultimately the urge to drink becomes too much to handle on your own. However, addiction is not a matter of willpower. Symptoms of Alcohol abuse should be recognized even in its first appearance.

The way that alcohol changes the brain makes it difficult to stop without professional help from an alcohol addiction treatment center.

Some other signs and symptoms of alcoholism to be alert for include:

Alcoholism Statistics in the United States

It is estimated that more than 17 million people in the United States have an alcohol use disorder. This does not include the millions more who engage in drinking behavior that puts them at increased risk of developing alcoholism in the future. Alcoholism typically affects more men than women, but both genders are at risk. It is also a condition that does not only affect adults but children as well. In 2012, there were around 855,000 adolescents between the ages of 12 and 17 who struggled with alcoholism. The younger a person is when they start drinking, the higher risk they put themselves at for developing an alcohol use disorder.

Many people underestimate the dangers of drinking since it is legal in the United States for those ages 21 and older. However, statistics show that alcoholism is a serious problem with serious consequences if left untreated:

Fortunately, alcoholism is a treatable condition. Once signs of alcoholism have been recognized, acting immediately is needed. Crossroads’ alcohol addiction rehab center in Maine offers gender-responsive, customized treatment plans to meet your individual needs. Through a combination of Maine’s addiction treatment therapy, counseling, wellness services, holistic care, and ongoing support, you can learn to overcome or manage the underlying issues that contributed to your alcohol use. You will develop the skills and strategies necessary to reduce the risk of relapse and achieve the goals that you set for yourself.

Crossroads can help you to remember who you wanted to be and regain control of your life. Do not let alcoholism put your future in jeopardy, call 877.978.1667 for the alcohol addiction treatment center in Portland, Maine.

Contact Crossroads to learn more about how our alcohol addiction treatment center’s residential and outpatient services can support you in living a healthier life and focusing on recovery.