Top
ArticleCity.comArticle Categories Everything You Need To Know About The June 2019 Google Update

Everything You Need To Know About The June 2019 Google Update

Google just released a new update called the “June Broad Core Update” and there have been some recent shakeups in the search results.

In today’s article we’re going to discuss what happened, what changed, and our advice for keeping your traffic high!

What Happened With The Google June 2019 Core Update

On Sunday, June 2, 2019, Google did something that they RARELY ever do…

They actually pre-announced on Twitter that they were going to be rolling out a core update the following day.

Tomorrow, we are releasing a broad core algorithm update, as we do several times per year. It is called the June 2019 Core Update. Our guidance about such updates remains as we’ve covered before. Please see this tweet for more about that:https://t.co/tmfQkhdjPL

On June 3, 2019, Google announced that the June Core Update had officially gone live:

The June 2019 Core Update is now live and rolling out to our various data centers over the coming days.

Since Google typically does not pre-announce their algorithm updates, there were a lot of rumors spreading that this one was going to be BIG.

However, Danny Sullivan of Google said that this update was not particularly big or special in this tweet:

Nothing special or particular “big.” It’s the usual type of core updates that we regularly do. We just wanted to be more proactive. Rather than people scratching their heads after-the-fact and asking “hmm?,” we thought it would be good to just let folks know before it rolled out.

Interesting enough, despite Danny Sullivan’s comments, the SEO data shows this actually was a fairly significant update (more on that below).

On Jun 8, 2019 Danny Sullivan reported that the core update finished rolling out:

Also the core update is rolled out now.

Google “Diversity Update” Rolls Out At The Same Time

At the same time as the core update was rolling out, Google released another update called the “Diversity Update.”

Have you ever done a search and gotten many listings all from the same site in the top results? We’ve heard your feedback about this and wanting more variety. A new change now launching in Google Search is designed to provide more site diversity in our results….

Essentially, this update will help diversify the search results so the same domain doesn’t appear more than twice.

Have you ever done a search and gotten many listings all from the same site in the top results? We’ve heard your feedback about this and wanting more variety. A new change now launching in Google Search is designed to provide more site diversity in our results….This site diversity change means that you usually won’t see more than two listings from the same site in our top results. However, we may still show more than two in cases where our systems determine it’s especially relevant to do so for a particular search….

Site diversity will generally treat subdomains as part of a root domain. IE: listings from subdomains and the root domain will all be considered from the same single site. However, subdomains are treated as separate sites for diversity purposes when deemed relevant to do so….

Finally, the site diversity launch is separate from the June 2019 Core Update that began this week. These are two different, unconnected releases.

What Was Targeted With The June Core Update?

Analysis of website traffic and ranking data suggests that this update may be similar in targeting to the March 2019 Core Update, which saw larger shakeups in certain niches categorized as YMYL (Your Money & Your Life) like health, finance, legal, etc.

This is similar to what was observed in other core updates like the Google Medic Update.

With that said, Google specifically points out that this is a broad update not intended to target any site or vertical in particular.

Industry Observations About The Update

There have been many industry observations and theories about the update:

Was This A Reversal of The March 2019 Core Update?

Marcus Tober from SearchMetrics was reported in a recent SEL article saying, “my preliminary analysis is that parts of the core update from March were reverted.”

He added that “…it seems though that Google changed some factors to brand/authority too much in March and this is what was reverted. Especially in the medical space like a webmd.com or verywellhealth.com that lost, gained back their visibility.”

With the recent core updates, Google has a history of rolling back the dials. It seems like Google is trying to fine tune this, and with each core update, many of the winners are losers of the last update.

For instance, in the last core update in March 2019, Search metrics data points out that it many of the losers bounced back: 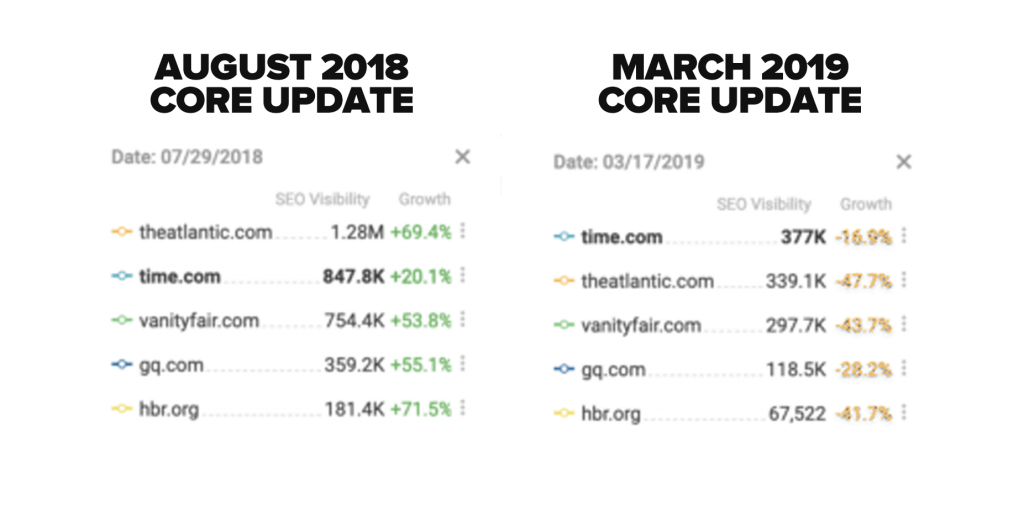 There were sites that experienced significant increases in traffic one day, just to lose it the next. It almost seems like Google was just testing the waters:

A site of mine tanked from top 10 results to positions 90+ for every keyword from the march 2019 update. Then on June 3 rankings snapped back to normal. I was literally going to abandon the site. Not now

Google has said that with these core updates, you may be receiving less traffic but there is nothing to change or fix.

This may be partly because we’re seeing Google experiment with changing the results to match a different search intent.

To give an example, in the past, we’ve seen sites with a specific health-related supplement sales page ranking for the supplement name.

Then Google changed the type of content ranking from displaying sales pages to informative content about the supplement.

For example, when you search “creatine” – Google doesn’t display actual products in the organic listings, it displays informative articles: 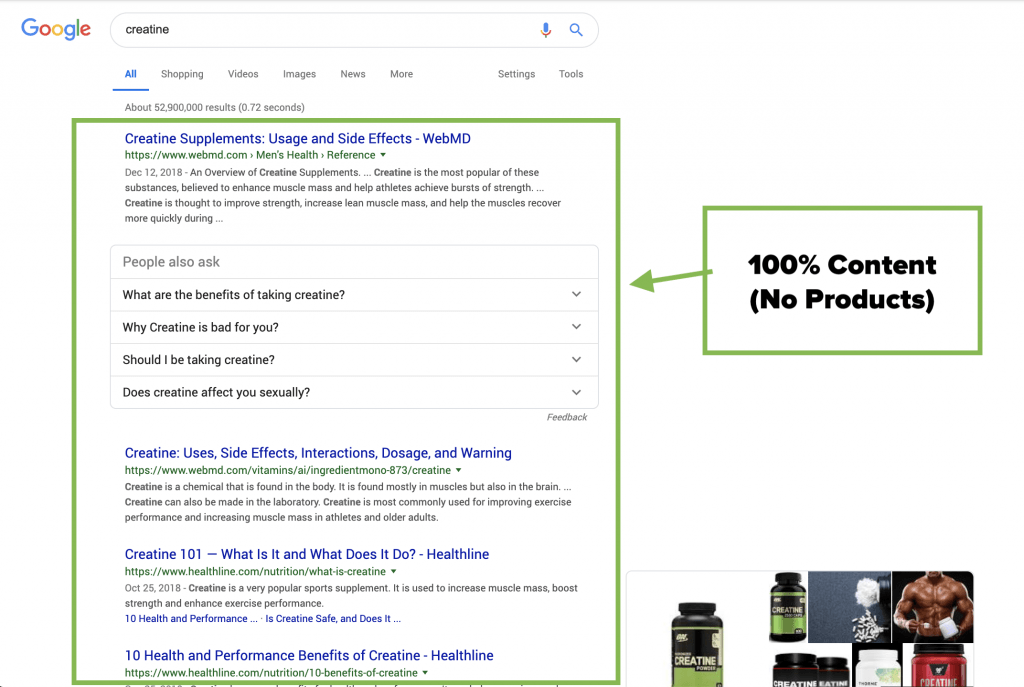 In this case, Google is trying to give the consumer more information about the supplement before purchasing.

If you lost traffic because of this type of search intent change, you could try winning it back by trying to rank informational content vs your actual sales page.

We’ve had a lot of success with getting traffic back to e-commerce sites by creating blog content around their products to help fix this.

I’m going to go out on a limb and say something crazy – Getting less search traffic may not actually be bad in all cases.

For instance, this is page about how to shoot a youtube video. Right around this update, this page jumped up and then started declining, which may look bad at first sight:

But when you drill down, you can see that this briefly ranked for “shooting youtube” which has 106,000 monthly searches!

But when you investigate this and search “Youtube Shooting” right now, Google is displaying results about an actual gun shooting at youtube: 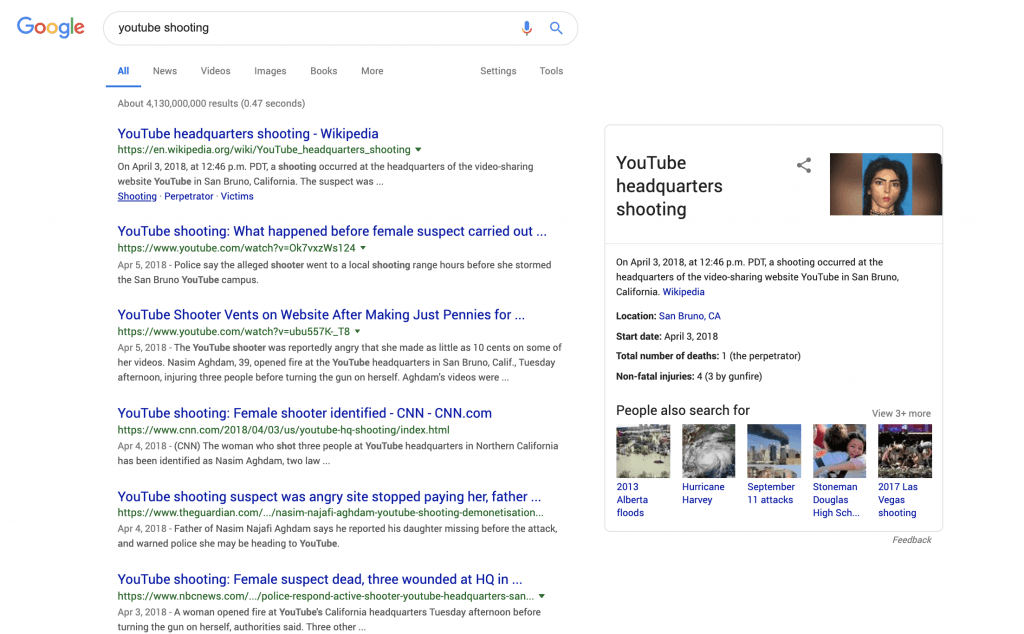 Clearly, if users are truly looking for the news story, losing traffic for this keyword is not that bad – those visitors would bounce anyways.

Google is always experimenting with this type of disambiguation, so try not to jump to conclusions before drilling down!

Advice If You Were Affected By This Update

The first thing that I’d like to point out is how much the serps are fluctuating. We showed clear examples of how the same sites are losing and winning with each Google update.

So if your site recently dropped, you may not have to do anything to get it to go back up. It’s unfortunate, but the best advice may be to just keep improving everything you can and wait for the next update.

Your site may not have anything “wrong” with it, Google may have just changed the search intent.

With all that said, here’s how we analyze sites and how you should go about analyzing your own:

Don’t just look at your traffic as a whole, drill down to figure out what pages are losing traffic and for which keywords.

You can use Search Console if you have it installed on your site, or you can use Ahrefs. 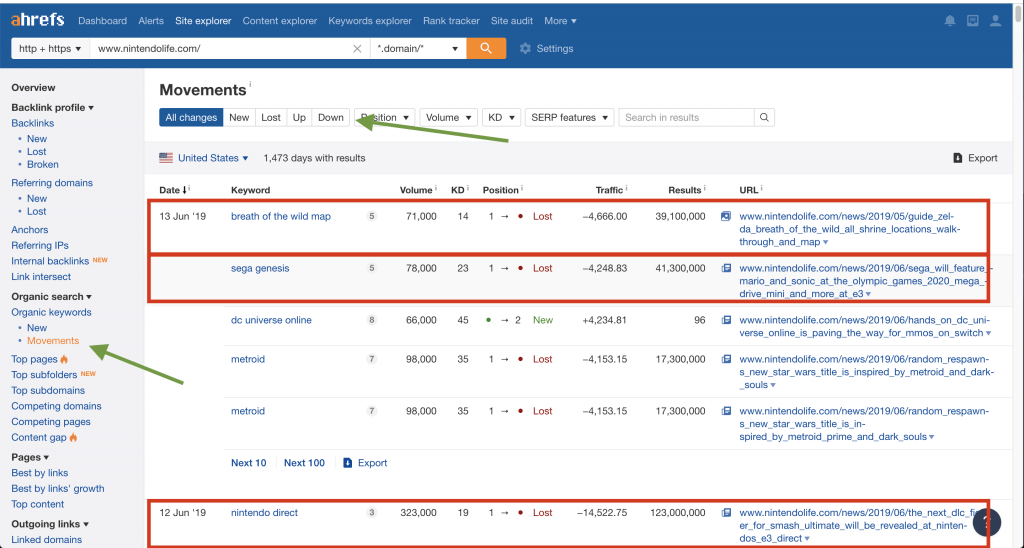 This will help you identify which keywords & pages you are dropping for. Look for patterns here.

One thing to remember is that if something is dropping, something else probably went up.

Google search the keywords you’re dropping for and see what types of content is Google displaying now and compare that to the content you have.

If you find a different type of content, you may consider adjusting your content to what is ranking in the search engines.

Here are some things to consider: 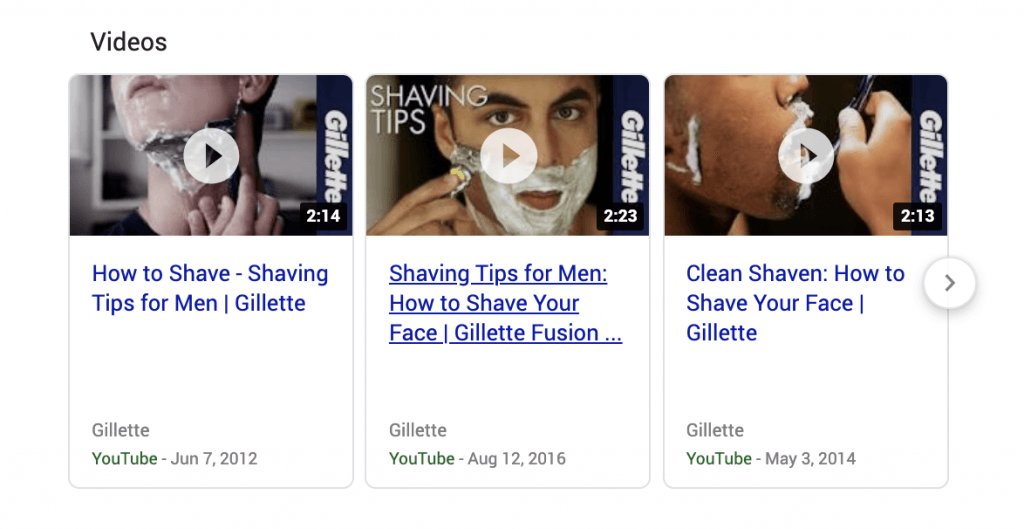 Now for some non-seo advice, every update like this is a good chance to diversify your traffic. We’re an SEO company, but we’re big fans of preaching multi-channel marketing.

As we’ve seen, Google keeps increasing the number of ads in the SERPs every year, so if you want to diversify your traffic, you might be interested in our newest product HOTH PPC.

If you were affected, make sure to use our advice above to drill down and investigate what really is going on with your site as well as what Google is now displaying in the search results.

What are you seeing on your end?