Top
ArticleCity.comArticle Categories Don’t Look Away: Discover the Meaning and History of the Evil Eye

Don’t Look Away: Discover the Meaning and History of the Evil Eye

You’ve probably seen the iconic evil eye symbol a hundred different times and paid no mind to it. Or, you’ve pondered its meaning and the history behind it.

In fact, you may even own a piece of jewelry with the evil eye symbol but not thought twice about its actual meaning- only that it looked ”interesting”!

Sound familiar? Well, here’s a quick guide on the history, meaning, and superstition behind the evil eye…

The History and the Meaning of the Evil Eye

The evil eye dates back about 5,000 years, as early as the Upper Paleolithic Age. This iconic symbol is present across various religions and cultures, but most significantly in the Jewish, Muslim, and Christian faiths.

The earliest known belief in the power of the evil eye dates back to ancient Greek and Roman times. It is also known as al-ayn in Arabic in most regions throughout the Middle East and Turkey.

So what does the evil eye actually mean?

It is a curse said to inflict varying degrees of harm on a person exposed to another person’s glare, praises, and compliments. A person can also expose themselves to the curse by acting without humility, acting with stubbornness or bragging about themselves.

The evil eye originates from jealousy or malice and is inflicted on another person with a look of evil. The superstition holds that this evil-eyed gaze can inflict actual harm or disaster on the receiver of the glare.

According to myth, you can also expose yourself to the evil eye curse even without the presence of others.

An evil eye curse is often characterized by misfortune, such as a streak of bad luck, a dissolved fortune, falling ill, falling prey to injury etc.

The evil eye is one of the most widely recognized symbols of superstition across the globe. And despite some differences across various cultures, it holds the same meaning no matter where the story is told. 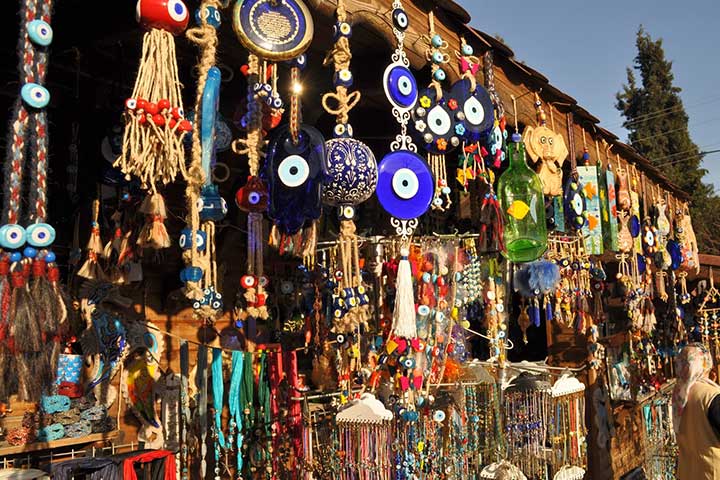 The Evil Eye: Turkey and Greece

As mentioned, the earliest sources of evidence of the evil eye curse and its beliefs date back to ancient Greek and Roman times. But the ideology quickly spread through the Middle East and into Turkish culture.

These cultures all believed that the curse was the biggest threat to anyone excessively praised, those who received excessive admiration or had a swollen ego.

These traits are believed to cause a number of physical and mental ailments. In fact, any disease without an obvious cause was once attributed to the evil eye curse.

These cultures believed and still do to this day, that the gods and goddesses were punishing those with too much self-pride or self-admiration.

As such, the Turkish created the Nazar Boncuk charm, also known as the Turkish Eye Bead. It is characterized by a dark eye, set against a blue background.

The premise of the eye bead is to ward off evil spirits by staring back at the world, keeping you safe from harm. Since its creation, Turks and numerous other cultures attach evil eye beads to everything they wish to protect from the curse.

This includes children, pets, their homes, and themselves. 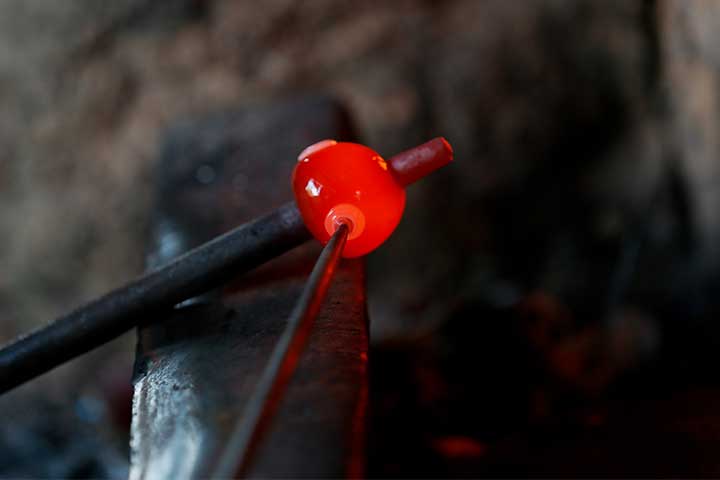 The Power of Blue Glass

So, what is the symbolism behind the color blue used in these famous Turkish eye beads you’ll find all over the world today?

In both Turkey, Greece and surrounding countries water is considered immensely precious. Parts of these countries are extremely dry and arid, therefore water symbolizes growth and prosperity. Without it, these cultures believe life would shrivel up and die- which is not inaccurate!

To this end, the Turkish eye bead is characterized by two shades of blue – a deep blue and lighter blue, along with the colors white and sometimes, yellow. In the center of the bead is a black dot, representing an ever watchful, protective eye.

Blue is also a symbol for good karma and positive energies and protection against the evil eye curse across other cultures. The light blue color is also said to represent the sky, symbolizing truth and direct protection against evil.

The evil eye charm is often given to new parents to protect their babies, to new business owners, at housewarmings and even hung in new cars.

Evil eye charms are often most commonly crafted from glass, which means they are prone to cracking and breaking over time.

And yes, there is a superstition related to cracked or broken evil eye beads too! So, what does it symbolize- good or bad luck?

According to myth, if an evil eye bead is found cracked or broken, this means it’s served its purpose of protecting the wearer or the object.

As soon as an evil eye bead is cracked, it must be immediately replaced with another to keep bad luck and evil at bay.

The Turkish culture believes that bad energy is directed to the bead. Once it’s cracked, this means the bad energy has been diverted away from you and into the amulet instead. 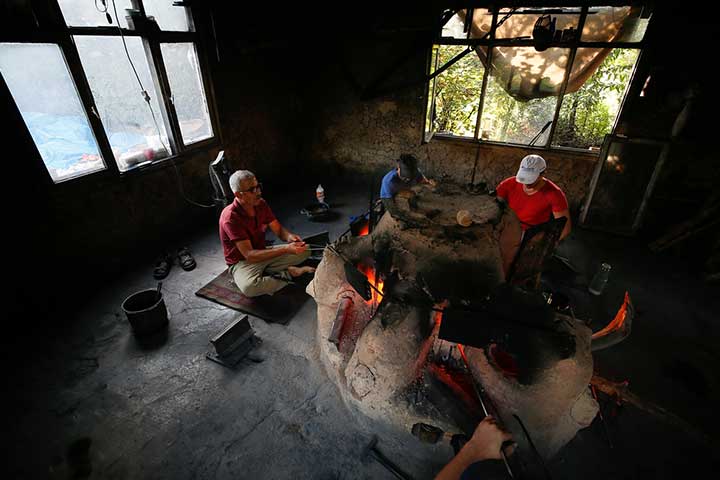 At Travel Atelier, we offer private, customizable tours across Turkey, Greece and many other parts of the Mediterranean.

With us, you have the incredible opportunity to explore some of the most remote villages in Turkey and get your hands on an original evil eye bead for yourself.

Along with this, discover the craft of evil eye bead creation and the art of blowing glass – a fascinating excursion for both adults and children!