While it’s something that’s been around for quite a while, a LAN party is still a great way to get a more social experience as a gamer. While, in many ways, LAN parties can seem a relic of the past, they can still be exciting. They’ve been going on for decades and just seem to evolve over time. And it’s easy to see that, whether you are playing WOW or attending one of the major events, that a LAN party is still something that brings people together. And with this in mind, if you don’t have the money to attend one of the bigger events, so you are are trying to set up one yourself, what do you need to think of to ensure your LAN party goes off without a hitch?

It might seem like an obvious point but you need to plan ahead. When it comes to LAN parties, you’ve got to prepare. Because it is all about warfare, collaboration, and more betrayal than an average Shakespeare play, it’s important that you organize the proceedings before they descend into chaos! You may have friends that are more keen on first-person shooters, whereas others are more diplomatic in their dealings, so you need to choose the game wisely. But what you need to do first is survey your attendees. What games do they own, what would you like to play, and what equipment are they going to bring? It’s best, especially so you’ve got the information in one place, to set up a Google Form, this way, it’s far easier for you to see what everybody’s got. As well as this, think about the operating system, so then you are able to map out the structure of the day. This is key, especially if people have older operating systems. As well, you need to think about asking everybody to list their online servers and handles, and how they prefer to be contacted. Having everybody on Skype or Instant Messenger is crucial, even if you’re all in one room!

Getting The Right Hardware

A great LAN party is dependent on the right hardware. You need a good power setup and a network that’s more than reliable, especially when you consider what you’re trying to pull off. When you start to think about something like power, you’ve got to consider the venue as well. If you are setting up a LAN party at home, can your circuit breaker cope with the electrical constraints? When you are looking at the power of an electrical circuit, it can easily hold 4 to 6 computers. It’s important to invest in surge protectors, as well as extension cords; this means that you’ll be able to split the systems across different circuits, so you don’t have a power outage right in the middle of the event. 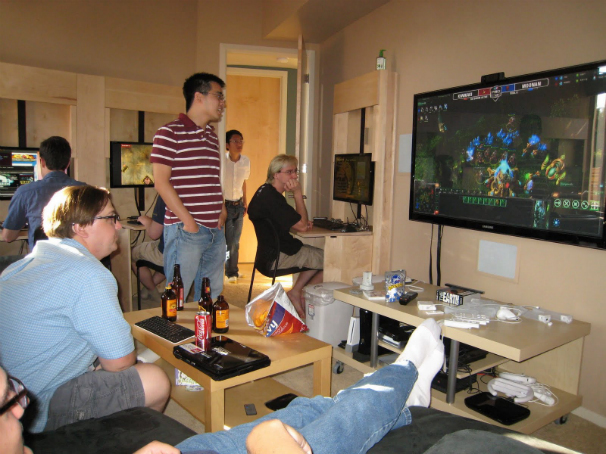 And if you have a small gathering of, say, 4 people, you won’t have to purchase additional wireless routers. But if you are looking to set up a larger party, you’re going to need a network switch, or think about a better quality modem so nobody will complain about the snail-like pace of the event. Ultimately, you want everything to be free-flowing and as fast as possible. Going by experience, one of the most frustrating parts of a LAN party is when there’s too much bandwidth being hogged. And there are plenty of types of modems out there, and the best Docsis 3.1 modem is usually more than enough for a smaller LAN party, but if you’re looking to set up a big event, it is important to get a decent-sized network switch as well.

How much file sharing are you going to be doing at the party? Because there is an abundance of data being traded, you might want to think about using one computer as a dedicated server. This can be quite complex, and there are various components to consider, such as the size of the LAN in comparison to the game you’re playing. But if you are hoping to share files quickly, you might want to get a gigabit switch. This bypasses a lot of frustration.

Using Software To Your Advantage

How to Play Old LAN Games Over the Internet

It’s not just about the file sharing, but if you want to make the events run like clockwork, send out that Google Form. You need to make sure that your guests arrive with all of the games pre-installed, as well as software patches done up to the most recent versions. You are on borrowed time to an extent and there’s always one person that wants to get going right away, so it’s far better to have everybody ready before turning up at the event. Because if someone has to configure their new game, and they end up having to download a game from a digital distribution platform, this is going to halt the bandwidth and caused a bit of consternation in the air. It’s also worth setting up a folder on your system or network storage device so everybody can grab or offload files as they choose. But there are various apps that can allow you to share files over the LAN. There’s a free app, D-LAN, that makes life a lot easier. Using a simple P2P style interface, it makes for a smoother process.

You should also think about preserving your server! If you’re holding an event in your home, if you have friends downloading questionable content, or there’ that one person that wants to watch numerous YouTube videos at the same time, not only does it slow down the bandwidth,  but if you don’t have enough capacity to cope, the party crashes before it even takes off! It’s also worth thinking about disabling all software firewalls. Because if there are connection issues, this might very well be the problem. But also, think about the fact that you want your party to be fully secured, so it’s worth asking everyone to update their malware and antivirus packages before plugging into the network.

Even with the best will in the world, there are things that can go wrong. In one respect, it’s a good idea for you to keep on top of potential issues by monitoring the party with a close eye. It’s always worth checking to see if there are any issues, especially with things like cabling. But one of the biggest problems is, naturally, the financial concerns. It’s always a good idea to try and minimize the cost where you can, especially if you are running a big event. You could have the players bring their own NICs. And as most people have cable or DSL connections, it’s likely they all have their own NIC anyway. If you are able to, beg, steal, and borrow hubs from everybody that you know. It’s also worth checking your power brick count. And when in doubt, always pack extra hardware. We’re talking Ethernet cables, mice, and power cords; these will all come in handy because, no doubt, someone will have forgotten something!

One of the most common complaints is a network outage. It’s important in this instance to keep calm. And, it’s very likely that the user may be exaggerating somewhat. What you need to do is look for the reason why they are complaining, where the person is located, but also, remember that when there are problems like this, it’s usually the simplest explanation that solves the problem! Check the user’s PC to make sure that the link light is on, and make sure they have a valid IP address. When in doubt, reboot the table switch, and tell everybody that connectivity will be lost. This tends to solve the problem.

There are also some basic linking problems that can occur. The Ethernet cable may not be connected, and this could cause issues with the Ethernet card. And while you might think of this as mere child’s play, it’s always worth checking the basics first! If there’s no link, after you check the cables and the ports, you may find that the NIC is dead in the water. There may also be issues with the DHCP. But this could be due to issues with firewalls, in which case, uninstall it. As well, if there are issues with the TCP/IP stack, look to see if there is an issue with spyware. If this isn’t the problem, try a System File Check.

A LAN party is not a relic of a bygone era anymore. If you think back to the good old days of a LAN party, it was a way to catch up with friends you hadn’t seen for a long time. Now because of the various broadband connections, and the ability to speak with people via voice and video chat, you don’t need to go very far to spend some quality time conspiring with your friends. But if you are looking to host a LAN party, it’s a different beast entirely. It can be a great party, especially if you can’t get to the big events, but to pull it off completely, make sure you plan ahead!