Goosehead vs. Covered by SAGE: Which is Better for Agents?

Originally Posted On: Goosehead vs. Covered by SAGE: Which is Better for Agents? (agencyheight.com)

Independent insurance agency models are continuously changing as a result of large competition and diverse businesses vying for the same pool of clients.

In this age, you can’t succeed just by doing things the old way. You also need a robust support system to help you genuinely grow yourself and your book of business. Multiple agency models exist, but agents don’t always know what will help them best.

Here we’ll be taking a look at two such agency ownership opportunities, namely Goosehead and Covered by SAGE. They share a few similarities, but a lot more differences.

Goosehead is an insurance agency that operates a franchise model. It works on a “you sell, we service” model and, on paper, allows agents to commit fully to sales.

How do Goosehead agents make money?

Goosehead agents work on a commission split basis. They get a percentage of the commission earned for each policy that they write.

How does the Goosehead insurance franchise make money?

Goosehead operates a franchise model and charges an upfront insurance franchise fee that can range from $27,500 to $66,000, depending upon the state of the outlet.

A total starting investment of $60,000 to $128,000 is required, and a schedule of additional out of pocket fees charged to agents are detailed in the contract. These include:

All of these fees can make running a franchise financially draining.

On top of these costs, they also take a minimum royalty of $1,000 that agents need to pay per month even if they make no sales.

How wide is Goosehead’s market?

Goosehead is appointed with over 80 carriers nationally, and as such, has a vast range of choices to present to potential clients. However, they only focus on personal lines like home, auto, and renters, which severely limits the target market for agents.

A non-compete clause in the contract also doesn’t allow agents to seek appointments with additional P&C agencies or carriers. Therefore, growth-minded agents cannot expand into commercial lines as long as they work with Goosehead. Online Goosehead insurance franchise reviews show that the points mentioned above are the biggest issues agents have with Goosehead.

Who is Covered by SAGE?

Covered by SAGE are newcomers to the insurance industry. At the time of writing, they operate only out of Georgia, with plans to expand throughout the east coast. They’re backed by investors who have built category-defining companies, and believe that disruption through market-leading technology will ultimately allow insurance agents to “be their best selves”.

Unlike Goose head, Covered by SAGE does not operate a franchise model. They’re an independent insurance brokerage platform. They offer a “you sell, we service” model to their agents, but that is just the start of what they’re trying to do.

How do Covered by SAGE agents make money?

Covered by SAGE agents also make money from commissions. Their rates are similar to Goosehead’s, with agents receiving from 80% to 95% commission (depending upon premium value) on new business and 50% commission on renewals for personal lines.

How does Covered by SAGE make money?

Since Covered by SAGE does not operate on a franchise model, there’s no franchise fees or marketing costs that other franchisors charge. Moreover, Covered by SAGE has developed proprietary technology that their agents can use free-of-cost. Agents will have to pay an onboarding fee of $2.500 upfront, and $250 per month from the 7th month.

Coupled with a no retail outlet requirement, agents can virtually start an agency of their own with no retail investment. Ultimately, Covered by SAGE only earns from the commission splits and onboarding fees, tying their success with the success of the agent.

How wide is Covered by SAGE’s market?

At the time of writing, Covered by SAGE is appointed with over 35 carriers, with more in the pipeline. Agents have wide market access. However unlike Goosehead, Covered by SAGE also allows agents to sell commercial lines, life, and health policies.

How do they compare?

Goosehead insurance franchise started as an extension of a traditional agency. As such, they have an internal corporate agency that competes directly with its franchisees.

Their “disruptive” technology is simply Salesforce. While this is a powerful platform, it can also be inadequate at times. The growth they experienced in the earlier stages of the company stagnated the need for innovation.

On the other hand, Covered by SAGE started as a technology company. They developed a proprietary plug-and-play technology that is easy to use and free for their agents.

Both companies have similarities, such as remote servicing teams, quoting from multiple carriers, and a lucrative commission split. But these businesses started with radically different goals, and as such, their approach to operating an insurance agency is markedly different.

Goosehead and Covered by SAGE both offer guaranteed buyouts. However, Goosehead imposes several restrictions and fees on the new buyer, reducing the ultimate value of what the franchisee can get. Online reviews for Goosehead insurance franchise aren’t the most complimentary either.

On the other hand, Covered by SAGE provides a buyout of a multiple of the value of the book of business with no strings attached. 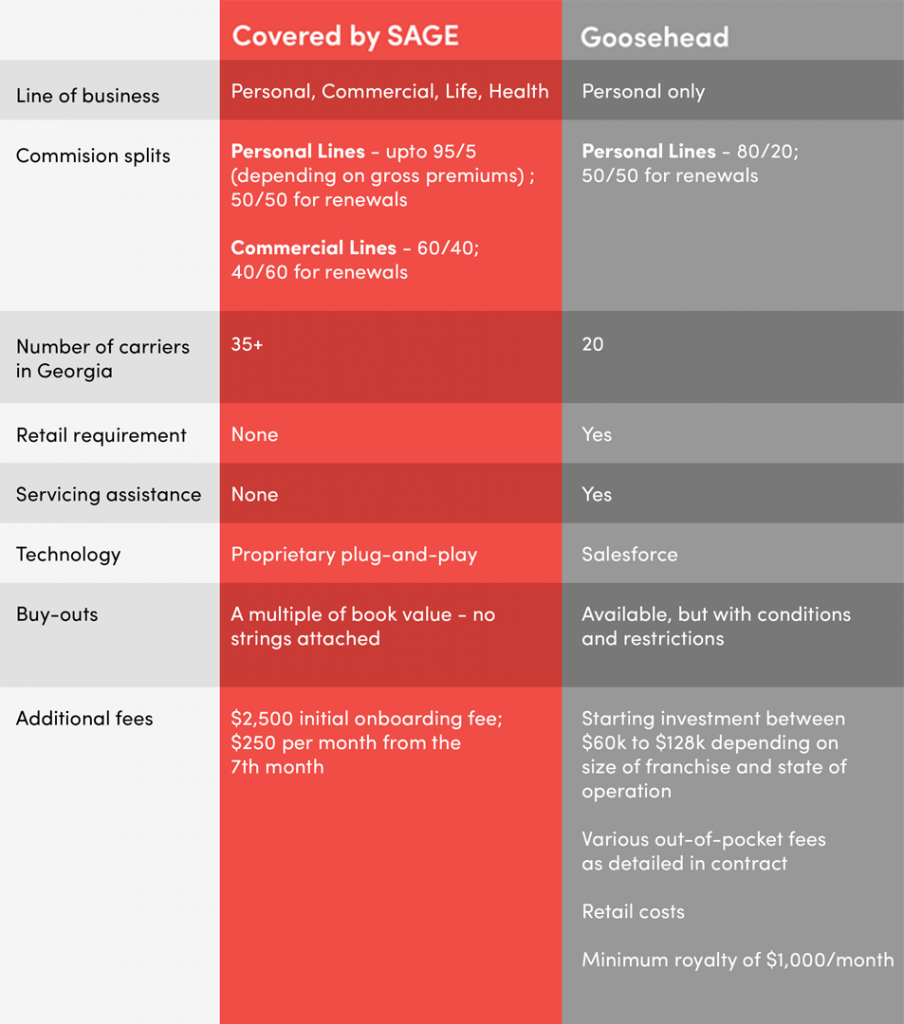 Which should you choose?

Goosehead’s model was revolutionary for a time when captive agencies were dominating markets. They disrupted the industry and were successful. However, a franchise model presents numerous challenges and financial obligations to the franchisee, not to mention a hefty Goosehead insurance franchise fee.

Covered by SAGE is looking to revolutionize the market today. They allow agents to run their agencies with no cost or retail requirements, understanding that agents must be enabled to entirely focus on what they’re good at: Selling.