Finger Monkeys: The Planet’s Smallest and Most Amazing Primate

Finger monkeys, or pygmy marmosets, are all the rage now. People who like to have exotic pets want to adopt these little critters and keep them under their care, and this has caused a sudden explosion in their popularity. Like piranhas and pythons before them, finger monkeys are becoming increasingly easy to find in the cities and in people’s homes. 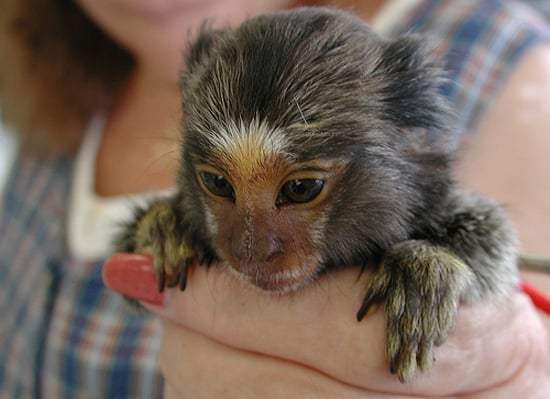 They are the smallest animals of the primate family.
Marmosets are part of the five monkey family that form a part of the New World Monkey classification.
They are native to the South American rain forests and live in the western Amazon basin.
They are under no threat of extinction and are classified as animals of ‘Least Concern’ by the IUCN.
Their lifespan is between 15 to 20 years.
Their primary diet is tree gum. Families of marmosets have been known to strip trees dry of gum and moving on to other groups of trees, ousting families that already live there. They can be quite vicious when fighting over turf. They are, however, too small to hurt humans.
They prefer living in groups and are known to be intelligent and speak differently among their peers.
They grow to about 6 inches, around 127mm and weigh only about 3.5 ounces, 100 gm.
Living in the forests, they can jump about 15 feet in the air, between branches. 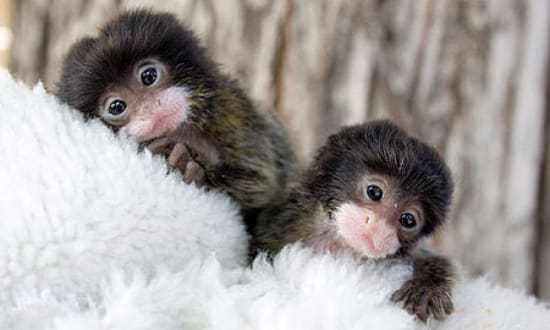 The finger monkey is native to South America. They are found in the western part of the Amazon forest. They are found all over Bolivia, Peru, Columbia, and Western Brazil. They stick to the undercover of mature forests and live among the lower branches of trees. Their spread is limited only by the rivers that cut through the forests and are not known to be strong swimmers. Their main area of activity is between the ground and about 60 feet in the trees. Since they need water to survive, they are found around the areas that are able to sustain water during the dry months. So small ponds and lakes are where finger monkeys usually congregate around.

Finger monkeys are avid hunters and are often seen hunting down insects and butterflies. Moths, beetles and such cretins make up a good part of its diet. While they do hunt, its main source of sustenance is tree sap. They love to suckle on sap to such an extent that they have found ways to make the job of extracting the sap also easy. They bite, scratch and peel back the bark of trees and eat the gum that oozes out. After doing this repeatedly, the trees develop scar tissues that resemble circular, pimple-like structures. By keeping these bumps open and soft, they are able to draw as much sap as they need. Eventually, the trees will run out of sap and so they will leave it and find other trees nearby to harvest. The removal of sap from trees do not damage them, rather, the sap will eventually come back. Till that happens, finger monkeys will keep moving from tree to tree. 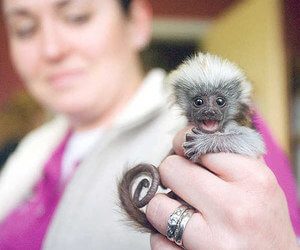 They are social creatures, so they travel and live in groups. Turf wars can get nasty and they are known to be savagely territorial. A family of finger monkeys usually have about 6 to 9 members with an equal number of males and females. That is one of the reasons why it is a lot better to have at least two monkeys together if you want them as pets. They thrive with company, and are known to be smart enough to have language skills and even be able to ‘’speak’’ with different monkeys using different patterns.

The female finger monkey normally gives birth to twins, twice a year in most cases. Triplets are rare with an 8% probability and single offspring coming in at 16% of the time. Pregnancy is between 119 and 140 days. Female finger monkeys can have up to 4 succeeding litters in a lifetime. The high birth rate of these monkeys and the low infant mortality rate put these animals in the least concern category for extinction. Their biggest threat, however, comes from the loss of habitat from deforestation and environmental threats from changing global climate. The illegal pet trade is also putting these creatures at risk. The infant mortality rate is as low as 25% and even that is mainly because of infants falling to the ground after slipping away from their mothers. 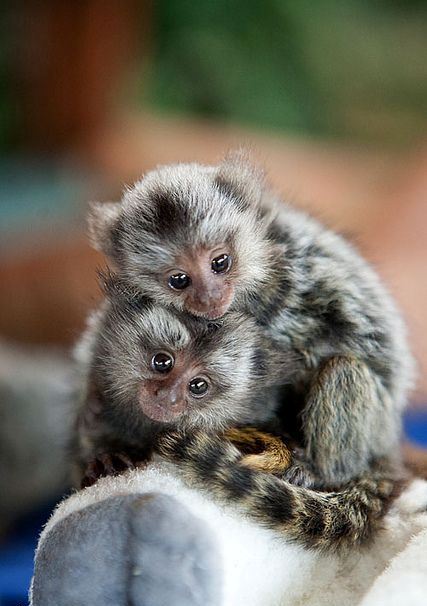 Their communications are limited to gestures and trills and they are not a very noisy kind of creature but can let out high pitched squeals when they sense danger or are physically threatened.

As pets, they are easily irritated, they tend to pick up human infections like the flu, and can become easily agitated. Primate vets often describe finger monkeys like having a set of children- smart, yet playful, and misbehaving children. They will make a lot of screeching sounds, they fight a lot and throw feces at each other all the time. They are also quite temperamental and will bite, scratch and attack all the time. They are complex creatures, but it is possible to integrate them with family, and they might even get acquainted with the family. Their playful nature and cute looks make it seem like they would be great as pets, but in reality, they make difficult pets. 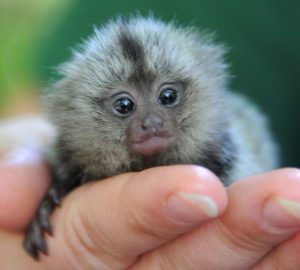 The finger monkey, like most exotic pets, is not a domesticated animal. Unlike cats and dogs that have been bred over centuries exclusively to live in houses and cohabit with humans, finger monkeys are wild animals that live, hunt, and breed in the wild. In fact, they are not meant to be pets at all. However, local governments and federal bodies do allow it and hence having finger monkeys in your home is not strictly illegal. They are susceptible to human diseases, so, if you must have one, make sure you visit the vet regularly and stick to the instructions given.