The Ladies of CBD

Women’s health across the U.S. varies by state, but they are more susceptible to various illnesses and diseases compared to their male counterparts. Osteoarthritis, lupus, multiple sclerosis (MS), along with numerous psychological disorders, are just a few serious issues that are more prevalent in women than men. While modern medicine is the go-to for treating major diseases and even small ailments, alternative medicine is still practiced by almost a third of Americans. Alternative medicine covers a wide range of treatments for an array of disorders, but one treatment has recently been all over the news.

Cannabidiol, usually referred to as CBD, is a non-psychoactive chemical compound found in the marijuana and hemp plant. For those with less experience with marijuana, that means it does not get users high. Although the ingredient has been shown to relieve pain and reduce symptoms of psychological disorders, the Food and Drug Administration has not approved its use for anything other than severe and rare forms of epilepsy.

Approved or not, the use of CBD has increased drastically across the country, popping up in products like bath bombs, oils, and even dog treats. With women’s susceptibility to mental illnesses and other physical ailments, how many American women are using CBD? Of those who are, do they find it helpful in treating their problems? To find out, we surveyed 855 women who reported using CBD and got the details on the how and why of their use. Keep reading to see what we found. 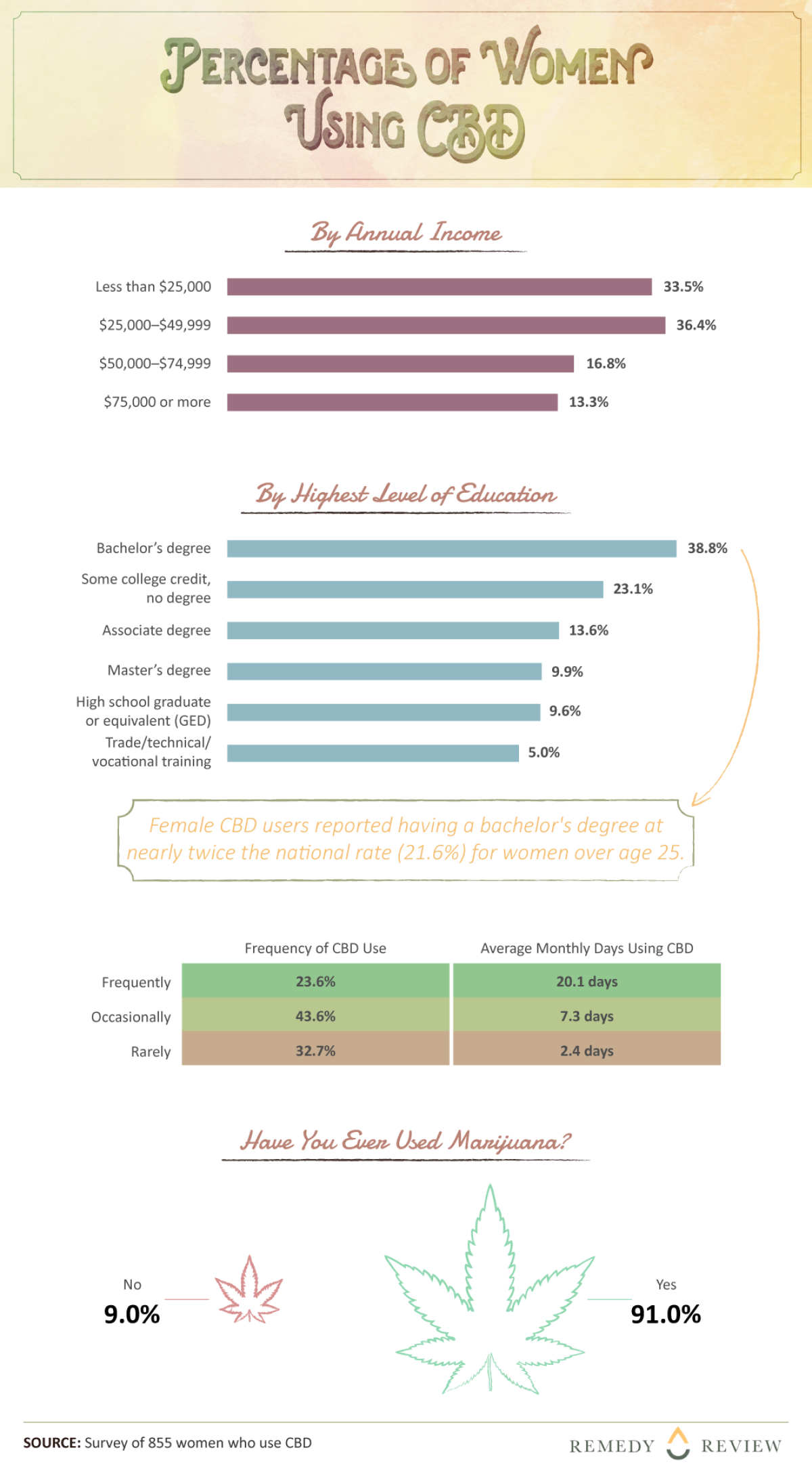 The AARP credits seniors for the CBD boom, citing more than 36 percent of patients using medical marijuana are aged 50 and older. But when looking at women who used CBD, those aged 50 and older only made up 11.5 percent of users. The majority of women who used CBD were aged 20 to 39 – they made up 71 percent of users, with an equal distribution between 20- to 29-year-olds and 30- to 39-year-olds. The average female user also had a bachelor’s degree and made between $25,000 and $49,999 annually. While nearly 40 percent of women who used CBD reported having a bachelor’s degree, the national rate in 2017 was only 21.6 percent for women over the age of 25.

The average female user also didn’t use CBD that frequently. Almost 44 percent of women reported using CBD occasionally, or an average of 7.3 days per month. Since the FDA has not approved the use of CBD outside of treating epilepsy, there is no recommended daily intake (RDI) or recommended dosage for users to follow. That said, experienced CBD users will often recommend at least a daily dose, depending on the type and severity of symptoms. However, only about 24 percent of women used CBD frequently – or, on average, 20.1 days each month.

The frequency may vary, but 91 percent of women who reported using CBD also reported previously or currently using marijuana. It’s important to note that while CBD and marijuana share an origin, they are not the same substance. The main compound in marijuana is tetrahydrocannabinol (THC), a natural compound found in the same plant as CBD, but it is psychoactive. THC creates the high that CBD does not. 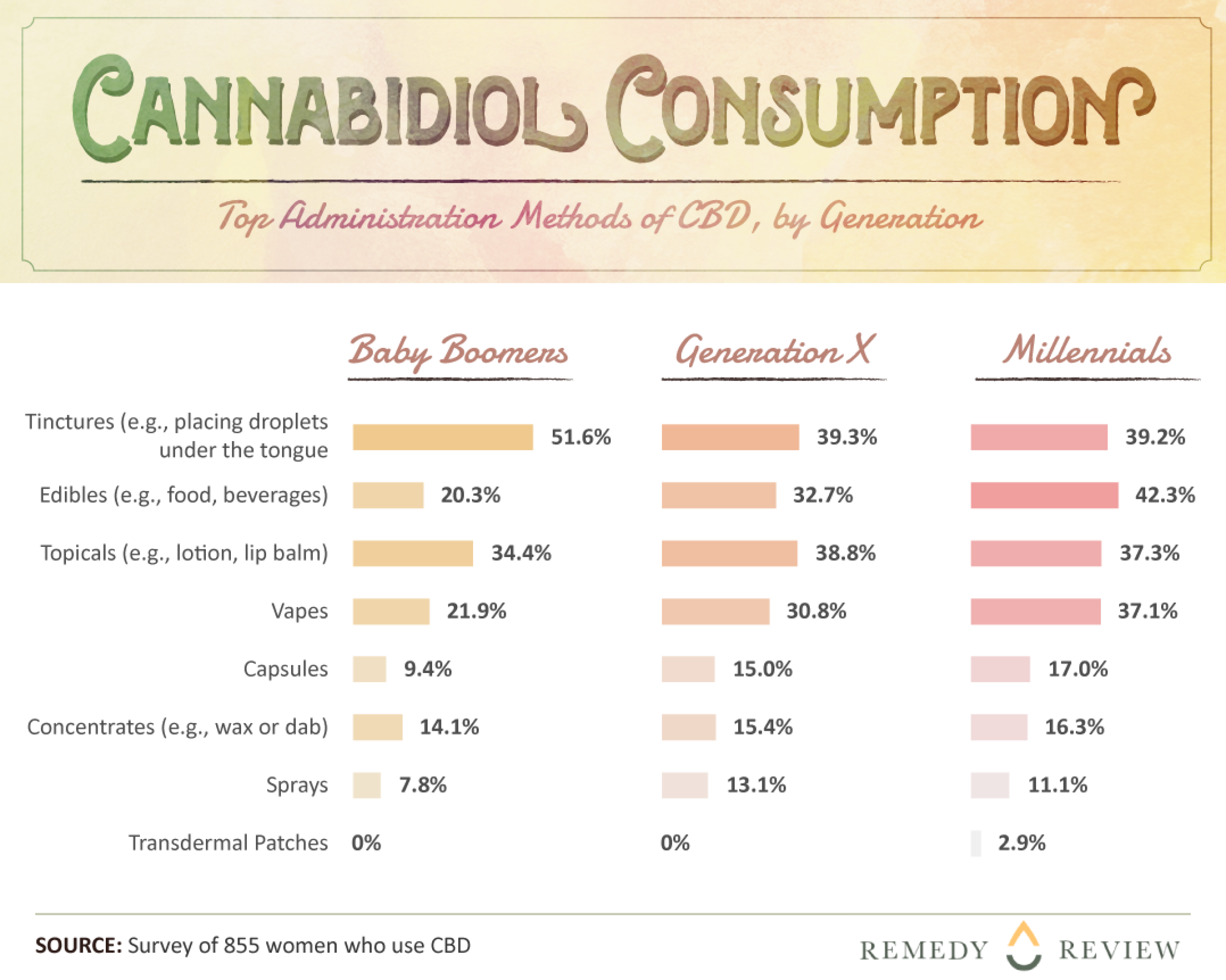 Most people don’t think about treating ailments with gummies, skin care products, or smokable pens, but when it comes to CBD, users are reaping the benefits from a wide range of products.

Of course, bath bombs infused with CBD may be trendy, but almost 52 percent of female baby boomers and over 39 percent of female Gen Xers stuck to getting their dose of CBD through tinctures, or a concentrated liquid herbal extract. With all the options for CBD, it may be surprising that the majority of women are choosing to drop liquid under their tongue, but this method is actually one of the most fast-acting and potent. Edibles were also a popular administration method, with 42.3 percent of millennial women choosing to ingest CBD.

CBD is used to treat various health ailments and is even used for general preventative care. But what are the main reasons women use CBD? Almost 60 percent of millennial women reported using the substance to treat anxiety, and around 65 percent of female baby boomers used it for pain relief. A typical treatment for people with anxiety disorders is benzodiazepines like Xanax and Klonopin. While generally effective, these drugs come with a high risk of abuse and addiction. Typical pain management comes with similar, if not more severe, risks – just look at the opioid epidemic sweeping the nation. Not only does CBD lack addictive properties, but also it has shown to be effective in treating anxiety and pain in humans.

Women also used CBD to treat depression (37.7 percent of millennial women) and PTSD (13.1 percent of Gen Xers), but a good portion used it to aid relaxation and sleep. Millennial women reported using CBD to relax and improve sleep more than any other generation. While the compound has been shown to combat insomnia, regular use of CBD doesn’t make users sleepy. Instead, CBD reduces stress, helping with relaxation in some and allowing others to decrease their stress enough to sleep soundly.

How Effective Is It? 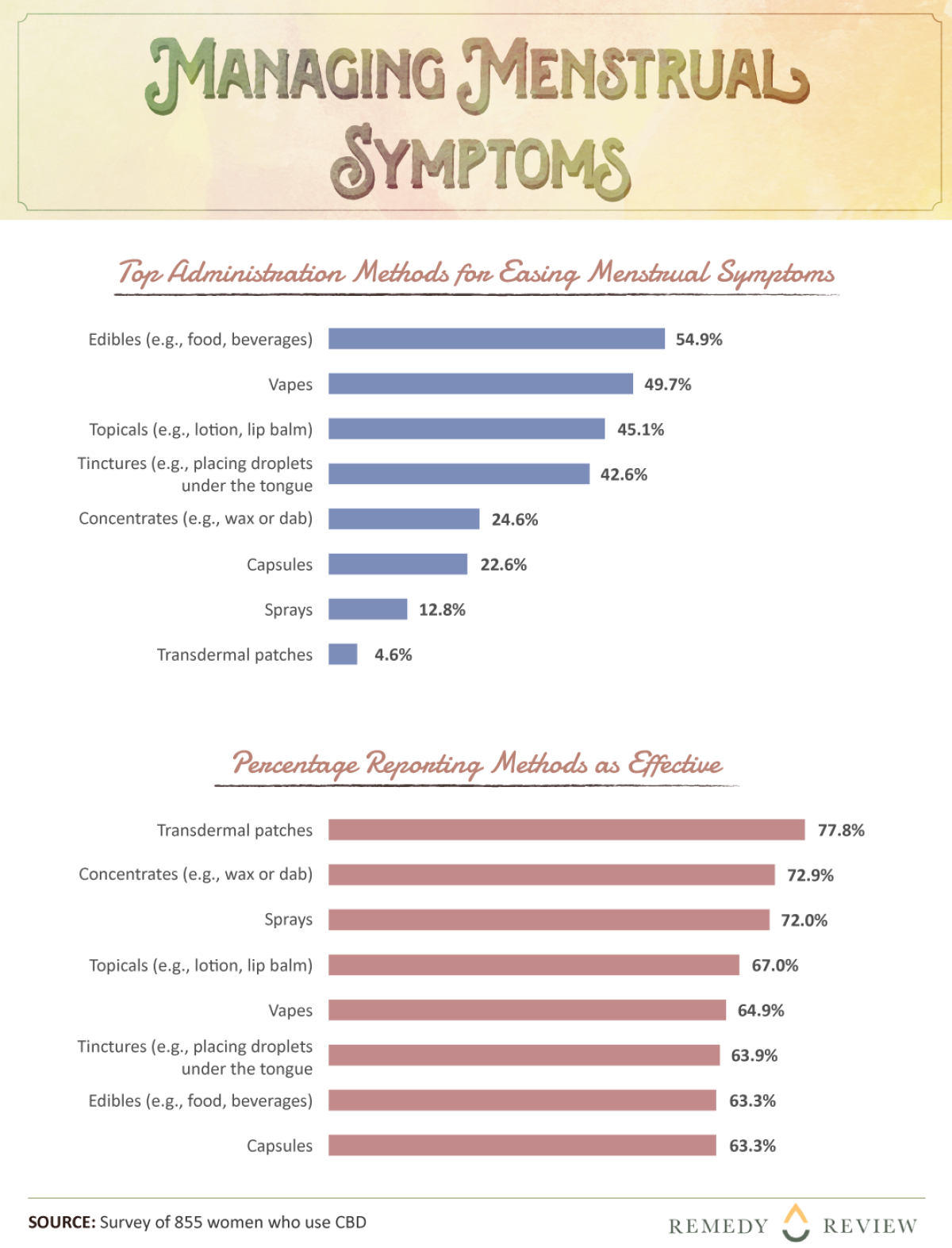 CBD has been reported to treat various symptoms, but women are benefiting from CBD in a way men can’t. When periods hit, they are usually accompanied by pain. While some may not feel much other than slight discomfort, others are left unable to function until the pain subsides. As a result, some women turn to CBD to ease their menstrual symptoms. The majority of women got their dose of pain relief through edibles, while around 50 percent used vapes. 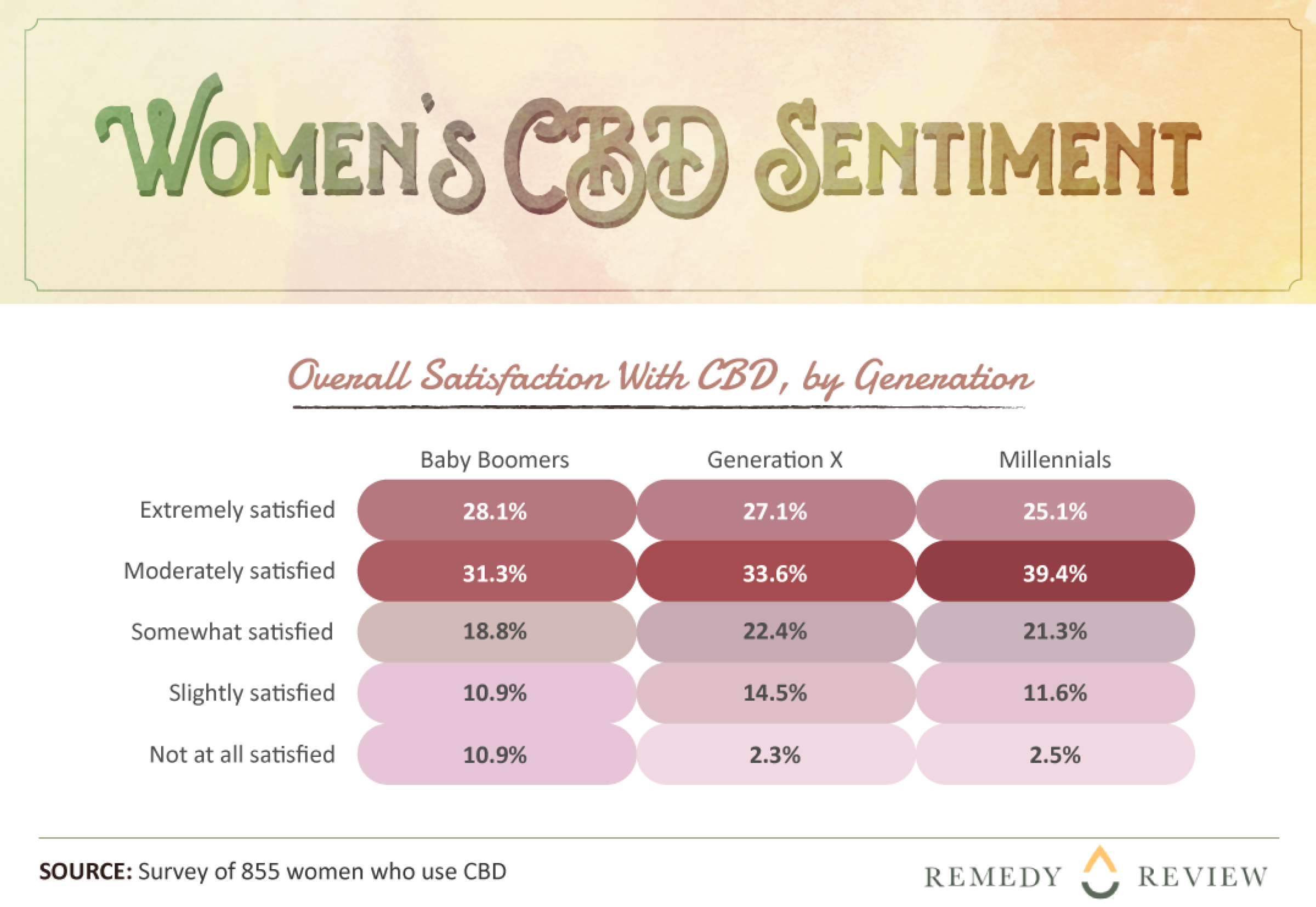 Overall, women were pretty satisfied with CBD. Over 39 percent of millennial women were moderately satisfied, and around 28 percent of female baby boomers were extremely satisfied. While baby boomers were the most likely to report being not at all satisfied, only around 11 percent of the generation weren’t enthusiastic about CBD. Overall, most women across all generations were at least moderately satisfied with their use. With CBD treating a wide array of illnesses and symptoms and coming in both practical and trendy products, there seems to be a way for all ages to find a product that best fits their wants and needs.

Products containing CBD seem to be everywhere – from pet treats to face masks, a variety of products have been created to treat a variety of symptoms. While CBD is natural and doesn’t leave users high, the FDA has not approved its use for anything other than treating specific types of epilepsy. Still, many women are turning to the substance to treat everything from stress and sleep to pain and psychological disorders.

Seeing as there is no federal organization reviewing and ensuring the safety and quality of CBD products, we have made it our mission to advance the well-being of people and make sure users are getting all the information necessary to prevent them from choosing the wrong products. At Remedy Review, we not only have simple and informative articles but also we review CBD oil through third-party labs to validate products and ensure customers are making protected purchases. To learn more about CBD, how it’s used, and which products are the best, visit us onlinetoday.