Signs You Need a Vyvanse Alternative

Originally Posted On: Vyvanse Not Right for Your ADHD Symptoms? You Have Options (alternativetomeds.com)

If you know anything about attention deficit hyperactivity disorder (ADHD), you’ve most likely heard of Adderall. For too many people, ADHD is stereotyped as a disorder for little boys who have trouble sitting still, and Adderall is the drug that helps them focus. This misconception can be damaging to the public’s perception of the disorder, which actually comes with a wide range of symptoms and multiple types of presentations.

Do Your Symptoms Require ADHD Medication?

Alternative to Meds Center has focused on ADHD medication withdrawal (and withdrawal from other prescription medications) for a decade and a half. We have published evidence regarding our clients’ tremendous successes. Discovering and effectively handling the root causes of unwanted symptoms is the meat and potatoes of our programs. Our aim is to provide actual, sustainable improvements in health and well-being, regardless of subjective opinions, previous misdiagnoses, over-medication, and labels.

Today’s scientists believe that the main reason adult ADHD remains underdiagnosed is that the diagnostic criteria for ADHD created in the DSM-V (the current manual for diagnosing mental illnesses, published in 2013) were developed around the signs and symptoms of children, specifically boys. There is also an implicit racial bias to how patients of color are diagnosed and treated for mental illnesses, ADHD included. This can affect the ability of young girls, children of color, and people experiencing adult-onset symptoms of ADHD to get proper diagnosis and treatment.

As it turns out, however, ADHD is a disorder that affects a diverse population of all ages and gender identities. And, for adults living with the symptoms of ADHD, Adderall can’t always be used to manage their condition — whether it interacts poorly with their other medications or just doesn’t seem to work for them. In this case, there are several alternatives typically prescribed instead, such as the drug Vyvanse.

What is Vyvanse (lisdexamfetamine)? Vyvanse is a stimulant in a family of amphetamine-based drugs used to treat certain symptoms of ADHD. Using a balance of naturally occurring chemicals in the brain called neurotransmitters, Vyvanse can target many aspects of the disorder that keep patients from being able to pay attention. The effect of this drug can help people with attention disorders have a much more organized and productive life. Some other Vyvanse uses are for the treatment of illnesses like Binge Eating Disorder, but due to the risk of certain more serious effects, it should never be used as a weight-loss drug. When used as part of a comprehensive treatment plan, Lisdexamfetamine (the active ingredient in Vyvanse) can be a great help to patients with ADHD. The drug addresses the inability to stay focused, sit still without fidgeting, and pay attention to any tasks at hand. By providing the ability for the neurotransmitters in the brain to flow uninterrupted, Vyvanse can help people feel more in control of their thoughts and actions, and ultimately, their lives.

One of the problems with prescribing Vyvanse as a treatment for ADHD, however, is that it’s not an accessible treatment for all patients. For some, there are barriers to receiving any mental health treatment — whether due to the cost, medical conditions, or the mis/underdiagnosis of ADHD in young girls and adults of any gender identity. Vyvanse specifically is known to be an expensive medication with no generic available yet on the market. Additionally, it comes with several potential side effects. If these barriers are keeping you from receiving the treatment you need to manage your ADHD symptoms, it may be time to look for a Vyvanse alternative.

Know the Signs You Need a Vyvanse Alternative

Outside of lack of access, one of the largest reasons you may be looking for a Vyvanse alternative is that, like any drug, this medication can come with several side-effects. While not all patients will experience all or any side effects while on this medication, there are few

Vyvanse side effects to look out for:

If you’ve been experiencing any of these side effects to the degree that’s more detrimental to your health than beneficial to your ADHD symptoms, there are plenty of natural options to turn to.

What Are Your Options?

Overall, people living with ADHD are living in a time full of abundant resources to help with the treatment of their symptoms and management of their daily lives. Not everyone’s bodies will react the same way when faced with the same treatments and medications, though. Fortunately, there are several prescription alternatives to Vyvanse. This drug is a stimulant belonging to the amphetamine category of ADHD medications.

Other amphetamines used to treat ADHD include:

Some other prescription alternatives are in the Methylphenidate category. These types of drugs are also stimulants and work by blocking your brain’s reuptake of norepinephrine and dopamine so as to increase those hormone levels.

Brand names of these drugs include:

In addition to these options, certain non-stimulant drugs can help with the symptoms of ADHD. When it is not safe for a patient to mix a stimulant with their current list of medications, doctors will often prescribe one of these. Because they affect neurotransmitters but don’t actually increase your dopamine levels, they are much more of a long-term use, extended-release drug.

With all the medications on the market today, patients can get a much more personalized treatment plan when seeking help directly from their doctor. But for those whose doctors are unable or unwilling to treat their ADHD symptoms, you are not without hope. For all the medications that can be used for ADHD, there are also natural alternatives to turn to (some medicinal and some therapeutic).

This naturally occurring amino acid that can be found in both green and black tea, as well as some mushrooms, has properties that have been said to produce a calming, relaxing effect. Pills of this supplement are commonly used as a natural ADHD treatment due to the stress-reducing effect aiding in brain-focusing power, especially when paired with caffeine. Ginkgo Biloba is an herbal supplement that has been used for ages to improve focus, mental control, and memory issues. It does this by decreasing a patient’s irritability and increasing the calming effects of mindfulness and resulting in more attentive behavior. The use of Ginkgo Biloba is not recommended for people with bowel diseases or anyone taking blood-thinning medications. The use of acupuncture to treat the underlying causes of some stress triggers, such as anxiety or depression, has proven to be an effective solution for certain ADHD patients. This is also a good solution to help those struggling with withdrawal symptoms when coming off of traditional stimulants or other prescribed ADHD medications. A treatment that measures the brain waves of a patient when responding to specific stimuli, this naturopathic solution works as a behavioral modification technique. With these measurements, professionals can help those with ADHD understand their stress triggers that cause flare-ups in their disorder and adjust the way they acknowledge and respond to them. 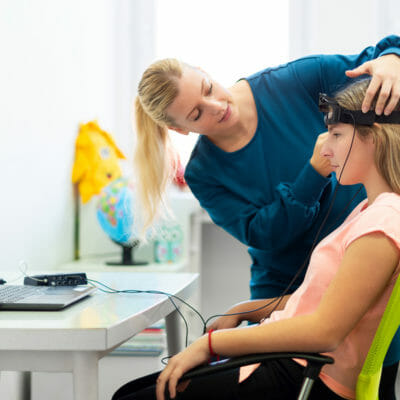 Is Vyvanse Stronger Than Adderall?

How Does Vyvanse Make You Feel?

What Is the Difference Between Adderall and Vyvanse?

What’s Next for You?

If, after learning more about some of the pharmaceutical treatments for ADHD symptoms, you feel like naturopathic alternatives could be the solution for you, the professionals at Alternative to Meds Center are always happy to help. Our holistic solutions to mental health disorders can help supplement your doctor’s treatment plans and provide viable treatment options for those who the medical system leaves behind. Contact us or call us at (888) 907-7075 to get more information on homeopathic ADHD treatment methods and the other natural alternatives we offer.