How We Predicted the Dow Jones Industrial Average Would Fall

The point of this article was simple…

According to the earliest known form of modern technical analysis, the major market averages were not confirming an upside trend!

As a refresher, I wrote…

Dow Theory was developed by Charles Dow, who, with Edward Jones, founded Dow Jones & Company and developed the Dow Jones Industrial Average. The two published their market theories in a series of editorials in The Wall Street Journal, which was co-founded by Dow. Dow Theory says that the market is in an upward trend if one of its averages (industrials or transports) advances above a previous important high and is followed by a similar advance in the other average.

For example, if the Dow Jones Industrial Average climbs to an intermediate high, the Dow Jones Transportation Average is expected to follow suit within a reasonable period of time. The combination of these two major indexes each confirming new highs signifies that a bull market is alive and well.

But then, I came in with the critical component of this analysis…

Both are not hitting new highs… Until the Dow Jones Transportation Average confirms the bull trend by establishing a new high of its own – the market’s bull run is in doubt. In many respects, that’s why I’ve been skeptical of this latest upside move.

Looking back today, this analysis was spot-on. For example…

Just as predicted, the Dow dropped more than 1,300 points. 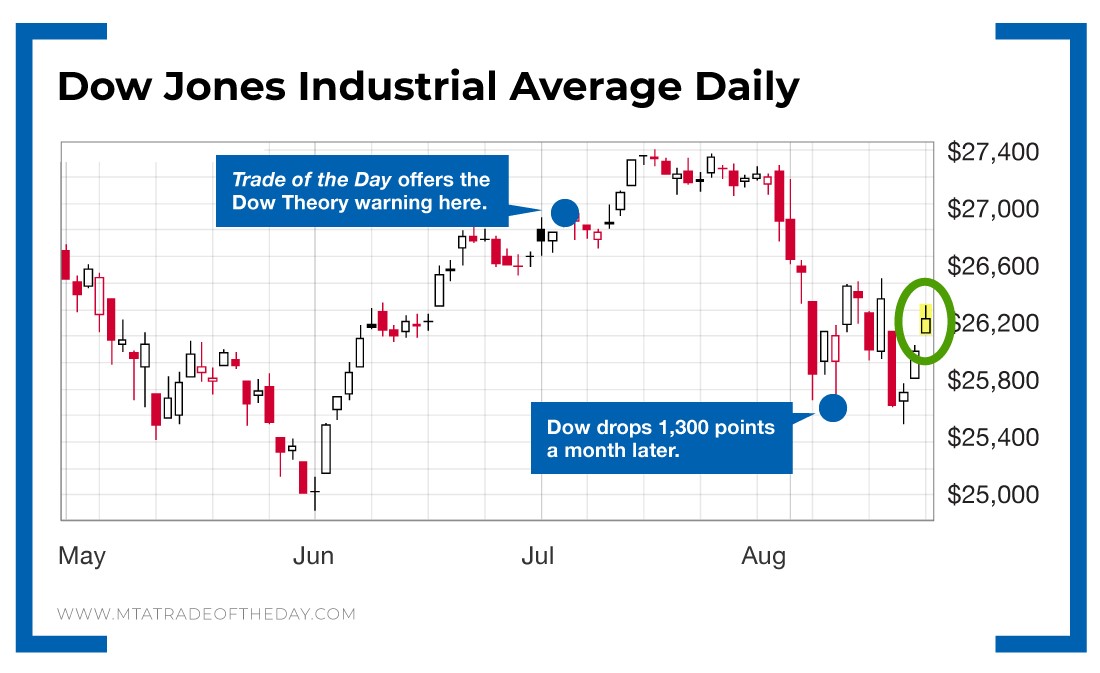 Why bring this to your attention today?

Because after the drop, the Dow is now testing – and bouncing – at a “double bottom” support level.

This could lead to instant profit opportunity…

Action Plan: Since you already saw how a study of Dow Theory predicted the recent market pullback, it’s now worth noting that a double bottom confirmation could lead to an extended bounce among the Dow transports.

In The War Room, this could lead to an immediate profit opportunity on names such as FedEx, Delta Air Lines, Kansas City Southern or Union Pacific. To have me on your side tracking these potential moves – join me in The War Room.