How Effective Is Laser Therapy for Toenail Fungus?

About 10 percent of U.S. adults, or approximately 23 million people, suffer from toenail fungus infection. But unfortunately, the treatments that have been around a while — oral medications and topical creams — often don’t really do the trick. The fungus usually comes back within 12 months. Plus, these treatments can have negative side effects and may have a bad interaction with other medications.

Luckily, laser therapy for toenail fungus is now an option. Since 2010, more than a handful of laser devices have been FDA approved and are used with success by podiatrists as a safe, quick, effective form of treatment.

But what is the process if you use laser therapy for toenail fungus and what can you expect, you ask?

To answer your questions, we’ve put together some basics on toenail fungus and laser treatment. Keep reading for a quick overview, and then, give it a try to see how it works for you. Our goal and the purpose of laser therapy is to help you clear up those nails so they can grow back healthy and strong.

What Is Toenail Fungus?

Toenail fungus is a fungal infection called onychomycosis. Tinea unguium is another name for it.

It’s an overgrowth of fungi that are often found on your body together with other bacteria. You can get the fungi from someone else too, like at a nail salon if the tools aren’t properly sterilized. It’s the same fungi that cause ringworm, jock itch, or athlete’s foot.

The problematic infection happens when the fungi get in through the cracks in your toenails and start to overpopulate in, on, or under the nail. It just loves warm, moist environments and often finds that in your toenail, especially when you wear shoes. And it’s even happier if you’re active and sweat in your sports shoes.

Onychomycosis can infect your fingernails too but that’s less common since your hands aren’t confined to a warm, moist environment like your feet are.

What Are the Effects of Toenail Fungus?

A fungal infection has an effect on your toenail but usually takes a while to develop and spread so you might not notice it at first.

Here are some of the symptoms to look out for:

The fungus can also spread to your other toenails and the skin around the nail.

If it gets really bad, you can develop a bacterial infection too and ulcerations. This is quite dangerous if you’re a diabetic. For some, it has even led to loss of their lower extremities.

It also doesn’t look particularly visually pleasing and can make you self-conscious.

How and Why Do You Get This Fungal Infection in the First Place?

So, a compromised or weakened immune system of any kind is often the culprit and increases your risk of getting a fungal toenail infection. A diabetic or someone whose blood flow to the feet is compromised, for example, weakens your body’s ability to do its thing in your toenails. An injury to the toenail can also make it tougher for your body to fight off fungi.

Men tend to get toenail fungus more than women. It’s also seen more in older people if their immune system weakens. If you smoke, you’re at a higher risk.

If someone in your family has it or someone you come into contact with a lot does, you’re usually at a higher risk too.

How Do You Know if You Have Toenail Fungus?

Your best bet is to get your toenails looked at by your trusty podiatrist. If you see any of the signs we’ve mentioned, just make an appointment for an evaluation. Since the infection will usually spread, you’re better safe than sorry.

Detecting it early also improves the chances for the treatment to do its thing and keep it from moving onto other nails or your skin. 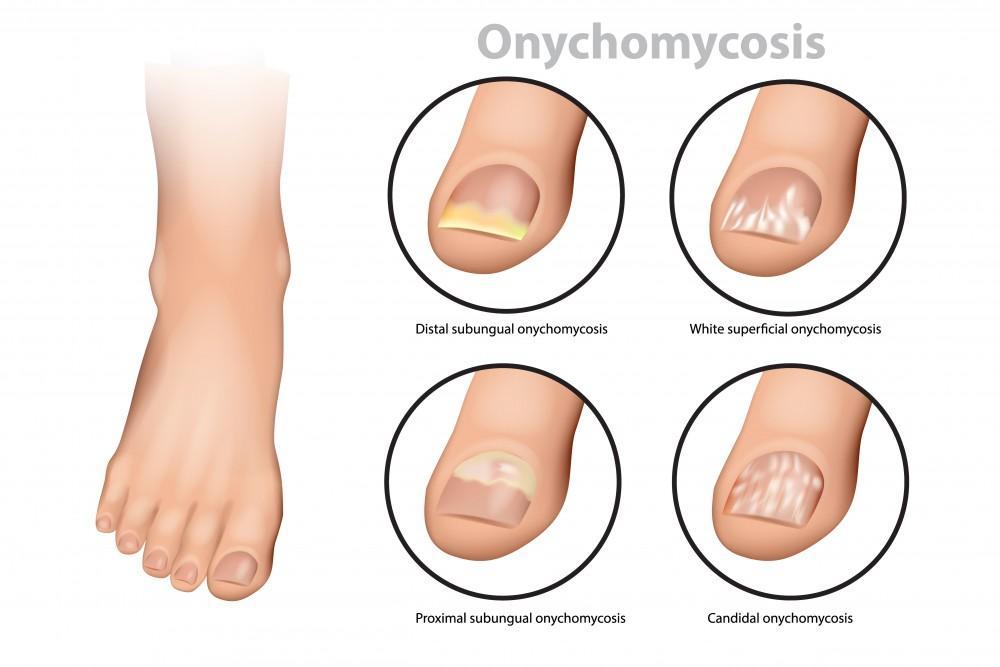 What Toenail Fungus Treatment Is Available?

So you’re wondering how to treat toenail fungus. Until relatively recently, toenail fungus treatment has been limited to topical anti-fungal creams/nail lacquer and oral medication. They’ve had some success but come with many downsides.

The antifungal cream/lacquer has the lowest success rate. Unless you have mild toenail fungus, it will likely not be able to reach the infection in or under the nail. Prescribed oral medications work better but have medical risks and react with other prescription drugs.

Side effects may include elevated liver enzymes that can lead to liver failure, headaches, stomach discomfort, loss of taste, and lupus-like symptoms.

Both topicals and oral meds require long-term applications and topicals can get quite expensive. Topical antifungal can take up to a year to show results. With oral medication, you may need to take up to a four-month course.

Another treatment option is to have your entire nail surgically removed. This, however, hasn’t proven to be successful.

Since these treatments are lacking, people began looking for toenail fungus alternative treatments. Enter laser therapy. Studies show its success in clearing fungal infection and so it was FDA cleared and began to be a top-pick in treating toenail fungus.

How Does Laser Therapy Work?

In simplified terms, the laser therapy device shines a laser light into the toenail, penetrating down on, in, and through the nail to reach the fungus. It “vaporizes the fungus.” It also leaves the skin and tissue around the fungus alone.

Essentially, the laser device is set at a certain wavelength that only the fungus will absorb. When it penetrates the fungus, it destroys it.

If we want to get a little more technical, there are a few ways it can destroy fungus depending on the laser. Most lasers use photothermolysis that causes photomechanical or photothermal damage. We like the non-thermal laser therapy as it is pain-free since it doesn’t use heat. It is still absorbed by the fungus only and damages the structure of the fungus.

But what you need to know is that laser therapy has been proven effective in clinical trials and because of this, the FDA began clearing laser devices.

As with all the treatments, you won’t see the results right away. You have to wait until your nice fungus-free nail grows in. This will take months. But you’ll start to see the difference as the new nail comes in.

Why Is Laser Therapy Better Than Other Therapies?

Among other reasons, laser therapy is better than other therapies because it is safe. It doesn’t have any of the side effects that come with the antifungals. It also doesn’t have the drug interactions that the oral antifungals can have.

It’s a great option for people that are taking the drugs that interact with the orals or that can’t tolerate the side effects.

The treatment is pain-free and easy. Expect to spend 12 minutes on treating each of your feet once you arrive in our office.

And the best perk of all is that the laser can get in through your nail to where that fungus is hiding and get rid of it quickly.

Which Laser Therapy Device Is Best?

This is likely thanks to its three successful clinical trials that ensure safety and effectiveness.

What’s so special about this laser? Besides the fact that it’s safe and effective, we love that it uses a low-level laser wavelength. Thanks to this type of cold laser, there’s no discomfort or searing heat pain during treatment like with some of the other laser devices. The treatment also encompasses your entire foot. It requires no operator, so man-made errors are eliminated unlike with other lasers on the market.

The laser doesn’t emit smoke fumes and 89% of patients have a positive response to the treatment.

Also, we love that this device is made in the United States.

If you come to us and get our non-thermal cold laser therapy, you’ll start with a nail fungus evaluation to determine if you have onychomycosis and what the best course of treatment is.

The treatments are done in our office, which makes it easy for you. The treatment lasts about 12 minutes and is pain-free.

And there’s no downtime. We’ll laser your fungus and you’ll get up and leave as nothing happened. Typically, you’ll come in for four treatments. But it depends on you and what your podiatrist recommends.

The laser destroys the fungus but the effects it had on your nail don’t go away until the new nail grows in and pushes it off the nail bed so it can be cut off like you would when you trim your nails. It usually takes six to 12 months for a full new nail to grow in.

In addition to treatment, you can get basic care techniques from your podiatrist to keep fungus at bay going forward.

Laser Therapy for You

Now that you know the basics on toenail fungus and how laser therapy can help you get rid of it, you’re ready to give it a go. Does that sound like a good plan? We hope so. Your toes will look and feel better and thank you for it.

Go ahead and give us a call to give it a go. And to ask questions. We really are here to help you get relief after these issues with your toenails.