Top
ArticleCity.comArticle Categories Ways to Gauge How Much Propane Gas You Have Left in Your 20lb Tank

Gauging how much propane gas is left in the tank can be hard.

Most of us simply aren’t used to having to make sure that there’s an adequate amount of the gas left for our plans.

Fortunately, there are a few easy ways that you can gauge just how much fuel is left in the propane tank.

Get a Bucket of Hot Water

Run a bucket full of hot water from the tap. It needs to be big enough for you to fit the propane tank into of course.

The metal of the tank is a great conductor of thermal energy, while the propane inside works as a heat sink. You can get a good approximation of how much gas is left by taking advantage of this fact.

You just need to run your hand down the side of the tank to find the cool spot. Since the liquified propane is absorbing much of the heat the cool spot will give you the approximate level contained within.

It’s not a super accurate measure, but it’s quick and easy. It’s precise enough to let you know whether it’s time to pick up a new tank or not.

In a pinch, such as when you’ve brought your propane tank along on a camping trip, you can use just a glass of hot water. Pour it over the side of the tank and find the cool spot. You’ll have to act more quickly than you would with a bucket, however.

The latter is also a safe way to test the levels of larger tanks where the bucket method may not be feasible.

The weight of your tank can give you a good indication of how much fuel is left.

You can always just pick it up and see if it feels empty, but that’s often not enough for you to know for sure.

The average tank used for grilling is a 20lb tank, for instance. The empty tank generally weighs around 17 lbs depending on the exact make and they contain roughly 20 lbs of propane when full. That means a full tank weighs about 37 lbs.

You can weigh the tank and subtract the empty tank weight to know what percentage of propane is left in your tank.

Of course, that doesn’t do you much good unless you also know how much propane is used for your application. The guidelines are roughly the same for furnaces and grills since both have an output measured in BTUs.

If you’re working on a monthly schedule there’ll be some additional math but it’s easily done with our handy calculator.

Gauges are the best way to figure out how much propane is left in a tank. While some tanks have them built-in this isn’t always the case.

There are a few different types and which works best really depends on what your application is.

The easiest to use is an in-line propane gauge which will let you know the rough percentage of propane left in a tank. It’s far more accurate than estimating using the other methods we’ve shown you but you’ll need to crunch the numbers on usage to know how much is left.

Larger tanks, such as those for heating systems, will almost always have an in-line gauge. If not, you should get one installed.

Some grills come with an analog scale.

These are simple to use: they’re automatically tared for the tank’s empty weight and the tank will be weighed while it’s connected to the scale. These are generally on the side of the grill.

They’ll give you a rougher estimate than an inline gauge but are perfectly serviceable for knowing whether or not you’ll be able to make it through your next grilling session.

Finally, there are electronic gauges. These are extremely accurate and constantly weigh the tank as it’s in use. They’ll give you an exact amount of how much propane is left in the tank but they’re a bit more expensive and most people find them unnecessary.

When Should You Get More Propane Gas?

Most people run their smaller tanks until they’re empty. That’s fine for grilling applications, and even the generators on recreational vehicles as long as you have an extra tank around but it doesn’t work for larger tanks.

For larger tanks that are used for home utilities you should be looking to order more gas when you hit about the 25% mark. That’ll give you enough time to get things arranged before something vital goes out.

Large tanks for home utilities can cause problems if you allow them to get too low, in addition to you running out of heat in the meantime.

The biggest problem is that you may end up with air in your lines. That can cause serious problems and end up needing costly repairs.

Most people will want to start making the call around 30% since no gauge is 100% accurate.

No Reason to Run Out!

There’s no reason to be left in the cold just because you’re starting to run low. The best defense is to make sure you know where to go before any problems arise.

For a grilling tank that may mean a run to the gas station, but for larger tanks, you’ll need a specialist.

If you’re ready to make sure that you never run out of propane gas again then we have a solution.

Try our excellent delivery service for peace of mind and a cozier home. 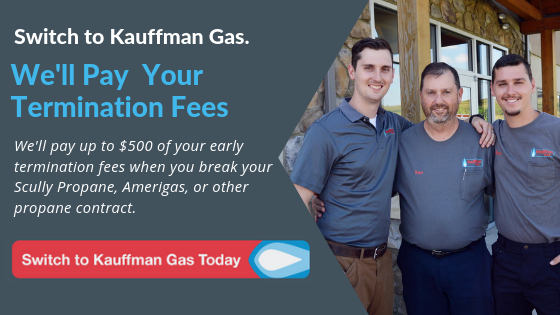