Even for only being around since the 1990s, the United Center — home of the Bulls and Blackhawks — has seen quite a bit of history within its walls.

The new “Madhouse on Madison,” which replaced venerable old Chicago Stadium in 1994, hosted the second run of three straight NBA championships by the Michael Jordan-led Bulls from 1996 to ’98, and more recently saw the Blackhawks emerge to win three Stanley Cups over a six-season span (2010-15).

If your first assumption about the United Center is that there must be a lot of banners hanging from its rafters, you’d be right. But there’s much more to see at the new Madhouse, both for new visitors and returnees alike — as much has changed over the years.

While the United Center is worth visiting for the history, it’s also worth staying for the atmosphere. Both the Blackhawks and Bulls go out of their way to ratchet up the fan experience.

And don’t forget the countless other events that take place at the United Center over the course of a typical year, from college basketball events such as the Big Ten tourney to the WWE and UFC, to major concerts and family shows.

Getting to the arena

The United Center lies just outside the core of Chicago’s Loop area, in a neighborhood known as the Near West Side. For visitors to the city, this presents a bit of a challenge in getting to the arena, but options do exist if you are trying to get there without driving.

The Chicago Transportation Authority (CTA) runs express buses for United Center events. Line #19 originates at Michigan and Randolph streets in the Loop and runs westward to the arena, with limited stops. There are also several local lines that run by the United Center.

It is possible to get to games via the CTA subway, known locally as “the L,” but doing so requires more walking — a less-than-desirable option in the dead of Chicago’s winters. The Illinois Medical District stop on the Blue Line lies four blocks south via Damen Avenue, but offers a direct connection to the Loop, Near North and O’Hare Airport.

About seven blocks to the northeast is the Ashland station on the Green and Pink lines, both of which can also be used to reach the central city. Click here for a CTA subway map.

Rideshare services Uber and Lyft will both do dropoffs at the arena, and riders can specify which side — north (Madison Street) or south (Monroe Street) — they can be taken to.

Drivers will find a number of surface parking lots surrounding the United Center, though the closest ones are reserved for premium permit holders. There is also a structure at neighboring Malcolm X College that is used on game nights.

If you’re visiting Chicago and staying in a hotel, you’ll still want to employ one of the above methods to get to the arena. Coming from the Loop, public transportation is an easy and painless way of getting to the United Center, but if you’re coming from the suburbs, driving and parking might be your best bet.

Things to do around the arena

For many years the area around United Center was just a quiet neighborhood, meaning fans coming to games had to look elsewhere to entertain themselves beforehand. But that has slowly been changing in recent years, with a few more options springing up.

The most prominent is attached to the arena itself — a new atrium opened up on the facility’s east side in 2017, featuring a larger team store for both the Bulls and Blackhawks, a bar and a sit-down restaurant. The Michael Jordan statue that once stood outside the arena has been moved inside the atrium, as well.

A few blocks to the east, along Ogden Avenue, you’ll find several other establishments, including a branch of the famed Billy Goat Tavern.

A little farther away is the up-and-coming West Loop neighborhood, which has become part of Chicago’s elite restaurant scene thanks to its popular “Restaurant Row,” which starts along Randolph Street at the intersection of Ogden Avenue.

Restaurant Row is a little less than a mile from United Center and features not only trendy and fine dining establishments but also gastropubs and outlets of Chicago’s well-known restaurant chains such as Lou Malnati’s — in other words, plenty of places that sports fans would be comfortable visiting prior to an event at the United Center. 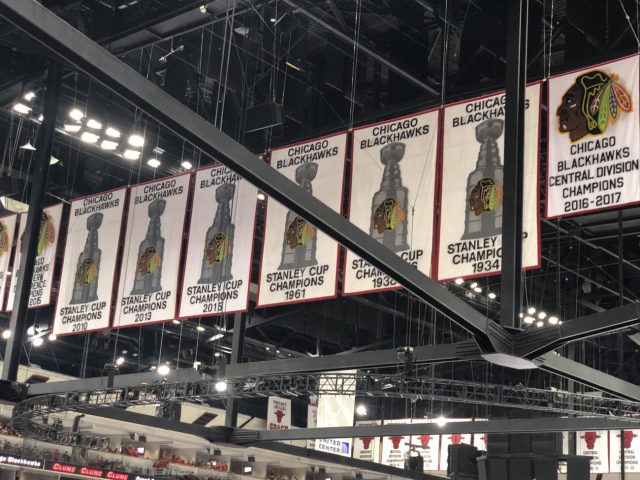 Watching a game at United Center

The atrium makes for a logical starting point for exploring the United Center, but before you go through the turnstiles, make sure you take a quick walk along Madison Street, where you’ll see statues of Blackhawks legends Bobby Hull and Stan Mikita (still outdoors) as well as a Blackhawks tribute on the other side of the street. Inside, check out the Bulls’ display of their six Larry O’Brien trophies on the main concourse.

By capacity, United Center is the largest arena in the U.S., and there are places within the seating bowl where it certainly feels that way. In general, the higher up you sit, the farther removed from the action you will feel — an obvious statement, for sure, but here you will definitely get a sense of how big the place is and how many people they’ve crammed into the building if you’re at the very top.

And at the United Center, there are sizable standing-room only sections at the top of the upper seating bowl where the view of the game is questionable at best, but they’re worth considering if you’re on a budget.

The moral when it comes to seating at the United Center is, if you’re more there for the game than for the experience itself, don’t cheap out on tickets. The good news is, as long as you’re not in the last 10 rows of the upper deck, your view should be pretty good.

Get to your seats on time to soak in the atmosphere, especially at the start of Blackhawks games — the team has perhaps the most well-known pregame routine in the NHL, with Jim Cornelison singing the national anthem while accompanied by one of the most powerful organs you’ve ever heard and the fans cheering throughout.

For any event, if it seems loud in the seating bowl, you’d be right, as the United Center’s designers made it a point to try to replicate the acoustics of the old Chicago Stadium, the original “Madhouse on Madison.”

Food and drink at United Center

Like many arenas around the country, United Center has also improved its concessions offerings in recent years.

Chicago’s unique food scene is reflected in the presence of local establishments such as Giordano’s (for deep dish pizza) and Gibson’s Steakhouse (made famous nationally for its appearances in the TV series “The League”), as well as the Chicago Dish stands that offer items such as Chicago-style hot dogs, Italian beef sandwiches and Italian and Polish sausages.

Beers from Goose Island Brewery, a local establishment that recently went national, are prevalent throughout the building. For more on concessions, click here.