In April of this year (2021), Debt Reduction Services conducted a survey among 517 U.S residents to gain insight into how individuals handled the financial burden of the pandemic.

Financial repercussions of COVID-19 are nearly impossible to fully quantify. As vaccination efforts ramp up across the United States, many Americans may be glimpsing a light at the end of the tunnel for the first time in a long, socially isolated year. When COVID-19 first appeared on the radar in the U.S., predictions about the longevity of the virus were incredibly diverse. Some expected the pandemic to be under control in only a few months, while others expect that we will see the virus and its variants for years to come.

Regardless of how long we may be contending with the virus itself, the financial repercussions of COVID-19 will resonate within many American families for years to come. The Bureau of Labor Statistics (BLS) reports that April of 2020 produced the highest rate of unemployment throughout the first year of the pandemic. In that month, unemployment soared to an astonishing high of 14.7%. In other words, 18.1 million Americans found themselves unemployed just one month into the pandemic.

The last time the unemployment rate lifted above 10% was during the tumultuous end of 1982 and the beginning of 1983, when a recession triggered by anti-inflation efforts hit America’s economy hard.

Fortunately, the unemployment rate dropped substantially in the final months of 2020, and the BLS reported an unemployment rate of 6.3% in January of 2021, or 10.1 million unemployed. While these numbers are much improved compared to the figures of April 2020, they indicate that the financial statuses of many Americans are still highly uncertain. As a new normal appears to emerge, as of yet it is unclear how the pandemic financially impacted Americans, particularly those with incomes that were heavily strained by unemployment, reduced hours, and/or illness.

How did credit card debt factor into this unusual financial burden? 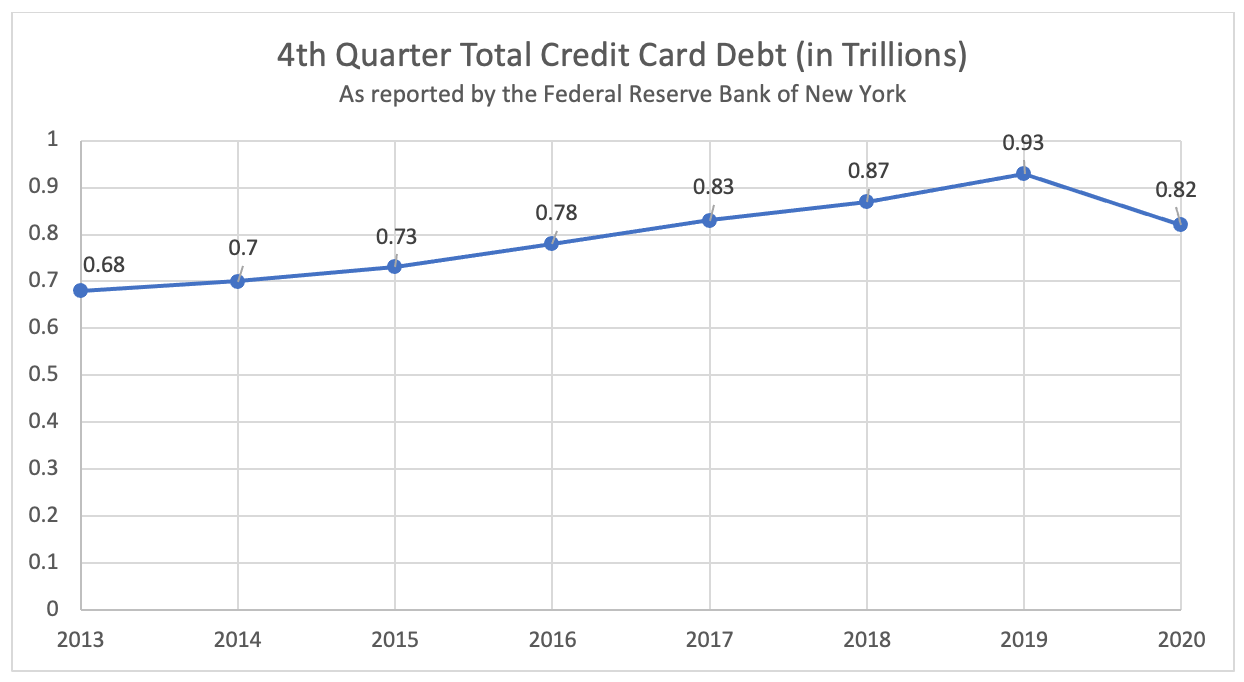 These seemingly counterintuitive figures raise significant questions about the spending habits of Americans in times of crisis and uncertainty. Following the aforementioned recession and high unemployment rate of 1981, the personal saving rate also had a spike to 13.2, the highest it had been in over 6 years. It remained above 12.0 for the duration of the recession.

This speaks to a larger pattern of saving and spending among Americans. As in 1981, the recent pandemic may have forced Americans to tighten their belts and fundamentally alter the way they spend and, consequently, use their credit cards. The results of our survey highlight this trend.

What did you primarily use your credit card(s) for? 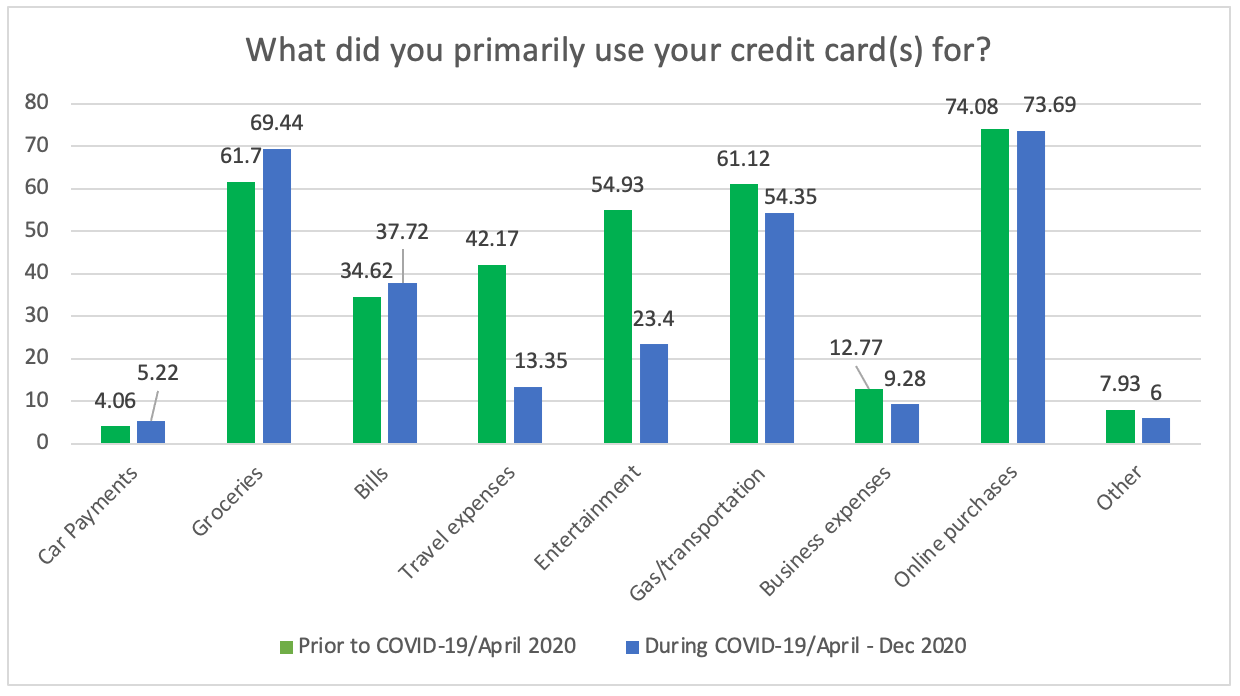 As would be expected, there was a major shift in spending away from travel and entertainment.

The shift away from travel can partially be attributed to travel restrictions in the early days of the pandemic. That said, 50.6 million people traveled for Thanksgiving in 2020, compared to the 55.3 million who traveled in 2019. The 2020 Thanksgiving travelers even surpassed the holiday passengers in 2016 (49.3 million).

When the economic uncertainty of 2020 hit, leisure travel reduced dramatically, with the exception of holidays. This suggests that many Americans were still willing to spend money and use their credit cards for holiday travel, but not necessarily for other recreational travel. These figures, combined with the survey’s massive shift in spending away from travel, indicate a nuanced difference between holiday travel and leisure travel. While holiday travel typically falls into the category of recreational spending, it appears that in 2020 many people may have considered it to be essential spending.

The data demonstrates that in times of economic confidence, people are more willing to use their credit cards on non-essential items, such as leisure travel and recreation. When they become skeptical or uncertain about their own financial statuses, discretionary spending plummets and, consequently, credit card spending notably drops.

Did your overall credit card debt increase or decrease in 2020?

Were you granted forbearance on your credit cards?

Did you experience a loss of employment in 2020 due to COVID-19?

The survey results support the data from the BLS, showing high rates of unemployment, particularly among those aged 18-29. The high unemployment rate among the participants further underpins the fear and financial uncertainty felt by many during the initial year of the COVID-19 pandemic.

Did you use any of your stimulus money to pay down credit card debt?

Did you use any of your stimulus money to add to your personal savings?

The results of our survey support the data coming from multiple Federal Reserve sources. Major shifts in spending away from leisure travel and/or recreational purchases seem to have freed up disposable income, transferring those funds into savings accounts instead.

Although the events of 2020 were certainly unprecedented, the spending habits exhibited by individuals seem to have followed a historical and cyclical pattern. In times of economic health, consumers are far more likely to spend on non-essential items, leaving personal savings lower on their list of priorities. When a recession or any type of economic uncertainty strikes, consumers begin to manage their finances on the basis of fear rather than confidence. In doing so, recreational spending drastically decreases while personal savings once again becomes a top priority. This was evident in the almost 60% of respondents who chose to put their stimulus payments towards their personal savings rather than spend it entirely on non-essential expenses.

In other words, consumers dramatically changed their spending habits based largely on their emotions.

This unique aspect of human spending is highlighted by the sharp decline in travel spending and the relatively large number of holiday travelers in 2020. The data suggests that holiday travel should have been extremely limited, given the extreme decline in travel spending. Instead, it was just about on par with previous years. In spite of, or perhaps because of, the high anxiety and crisis of 2020, consumers relied on habitual comforts such as a simple holiday among family rather than recreation or leisure spending.

Although COVID-19 was unpredictable and left many without stability, consumers protected their finances by shifting their disposable income into their personal savings and cutting down on non-essential spending. Nevertheless, even in times of fear and uncertainty, there are certain things on which we as humans are unwilling to compromise, further suggesting that spending is a highly emotional aspect of human behavior.