Picture this: You are walking on Costa Rica’s Ostional Beach on a dark, moonless night in November. As your eyes adjust to the dark, you see an armada of something coming out of the water and starting to approach you.

It is a Turtle Invasion, well not really, it is the female Olive Ridley sea turtle swarming onto the beach in wave after wave.

Onshore they are all are in various stages of digging holes in the sand with their back flippers. When the female reaches a depth of about 2 feet, she begins to lay her eggs—around a hundred of them! Fifty days later those eggs will hatch, and the tiny turtles, – only 3 inches long – will scramble toward the waves to begin their own journey. For the females, this journey will bring these turtles right back to this same beach 10-18 years later to lay their own eggs. 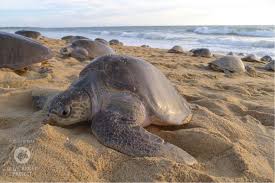 The next morning you head out at dawn to the same beach for your morning walk – remembering the miracle you witnessed the night before – and you are shocked to see local residents digging up the eggs and carrying them away by the hundreds in sacks! What?! You look around for the local authorities to stop them. You want to lecture them on conservation and ethics. Can they do that?? 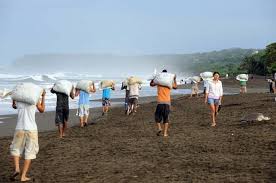 Yes, they can. But it may not do you any good to try and stop them. Frankly, poachers have been illegally harvesting Costa Rica turtle eggs for years and selling them on the black market, but now it is legal. To be fair to those that harvest the eggs, they should not be called “poachers” any longer.

Why is egg harvesting legal? Isn’t the Olive Ridley turtle an endangered species? Yes, it is. But let me explain why this contradictory situation exists and how concerned citizens have worked to resolve it.

Most sea turtles nest individually and sporadically so that their young hatch at unpredictable times and places, thereby outsmarting predators. But the Olive Ridley turtles’ strategy is to outnumber and overwhelm the enemy by mass nesting. This is called by the Spanish word “arribada”, meaning “arrival.” By instinctively synchronizing their egg-laying, so many hatchlings are produced that predators cannot consume them all. 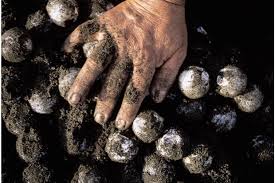 It is an excellent strategy, except the beach becomes so crowded with thousands of nesting turtles during the five-day arribada that it is estimated that about 30 percent of the eggs laid are destroyed by subsequent turtles digging them up. Further losses to the amount of eggs left are taken by people and local dogs. The eggs are sold to bars to be consumed raw as aphrodisiacs. The dogs likely have their own reasons.

The market for turtle eggs in Costa Rica has attracted dangerous and even murderous poachers over the years, many of whom have violently threatened and attacked environmentalists and locals who “have gotten in the way.”

The unique nesting behavior, or “turtle invasion”, of the Olive Ridleys, coupled with bad elements who were taking control of Ostional beach, catalyzed support for sustainable egg harvesting in the late 1980s. Why wasn’t all egg harvesting simply outlawed and the beaches patrolled by police? Because egg harvesting and sale by the locals (not criminals) is Ostional’s most important economic activity.

In recognition of this very human factor, the Ostional Integral Development Association (ADIO) was created in collaboration with the Costa Rican government to formulate a plan that allows for the collection of eggs that would have been destroyed by the next round of nesting turtles anyway. ADIO is run by local women, and harvesting is only legal during arribadas and only by a member of the association. Now more than a decade later studies suggest that Ostional’s egg harvesting program is one of the few successful conservation and development programs. According to one study the “current egg harvest levels do not negatively impact hatchling production”. Benefits have been equitably distributed and many community members feel that their standard of living has improved because of the egg harvesting program. 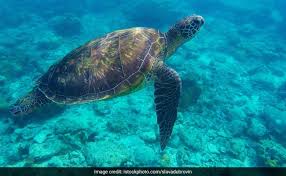 As Gaia Vince of The Guardian states, “What makes Ostional beach so extraordinary is that residents have found a way to make use of their natural resource but also to protect it.  And that is the key: we cannot protect the world’s wildlife unless we also protect the needs of the humans that rely on it.”

Today, Ostional remains the only place in the world where people can legally harvest sea turtle eggs.  These kinds of natural wonders, and the opportunity to help protect endangered species, are why I love living in the northern beaches of Costa Rica.

How can you help? Well, why not retire in Costa Rica and live near Ostional beach?  If you can’t move here you can always visit Ostional during the turtle invasion and help shoo away the dogs that dig up the eggs and the vultures who snatch them. Even if you are a culinary adventurer, you can choose to not eat the eggs since you cannot be sure they were harvested legally.