A Brief Overview Of Regression Testing

Studies have indicated that after installing a new app, only a quarter of the users return to the app on the second day. The retention rate is eminently low and the majority of the users uninstall the app after the first use. You might have guessed the reason for this. If you think the reason is scanty testing then you are correct. A lot of times testers show little interest when testing is repetitive. Although regression testing is crucial to the success of the project, it is often overlooked to some extent. So let’s understand the concept of regression testing.

What is Regression Testing

In simple terms, regression testing can be defined as retesting a computer program after some changes are made to it to ensure that the changes do not adversely affect the existing code. Regression testing increases the chance of detecting bugs caused by changes to the application. It can help catch defects early and thus reduce the cost to resolve them.

Regression testing ensures the proper functioning of the software so that the best version of the product is released to the market. Although, creating and maintaining a near-infinite set of regression tests is not feasible at all. This is why enterprises are focusing on automating most of the regression tests to save time and effort.

Unit Testing: It is done when coding changes are made for a single unit and a tester re-runs all previously-passed unit tests. Often automated unit tests are built into the code to make unit testing efficient.

Progressive Testing: This type of testing works effectively when there are changes done in the software/application specifications as well as new test cases are designed.

Selective Testing: In this to cut down the retesting cost and effort, testers use a subset of the current test cases. A test unit must be rerun when there are changes in the program entities it covers.

Retest-All Testing: In this, we reuse all test cases even where the changes have not been made. It shouldn’t be done where there is a small change in the application as it is very time-consuming.

Complete Testing: Complete testing is effective when multiple changes have been done in the existing code. It is done to identify unexpected bugs and the final system can be made available to the user once complete testing is done.

How to Derive a Regression Testing Plan

Whenever there is a change in the app or a new version is released the developer carries out these tests as a part of the regression testing process.

First, the developer executes unit-level regression tests to validate the code that they have modified along with any new test that is created to cover any new functionality. Then the changed code is merged and integrated to create a new build of AUT. After that smoke tests are performed to assure that the build that we have created in the previous step is good before any additional testing is performed. 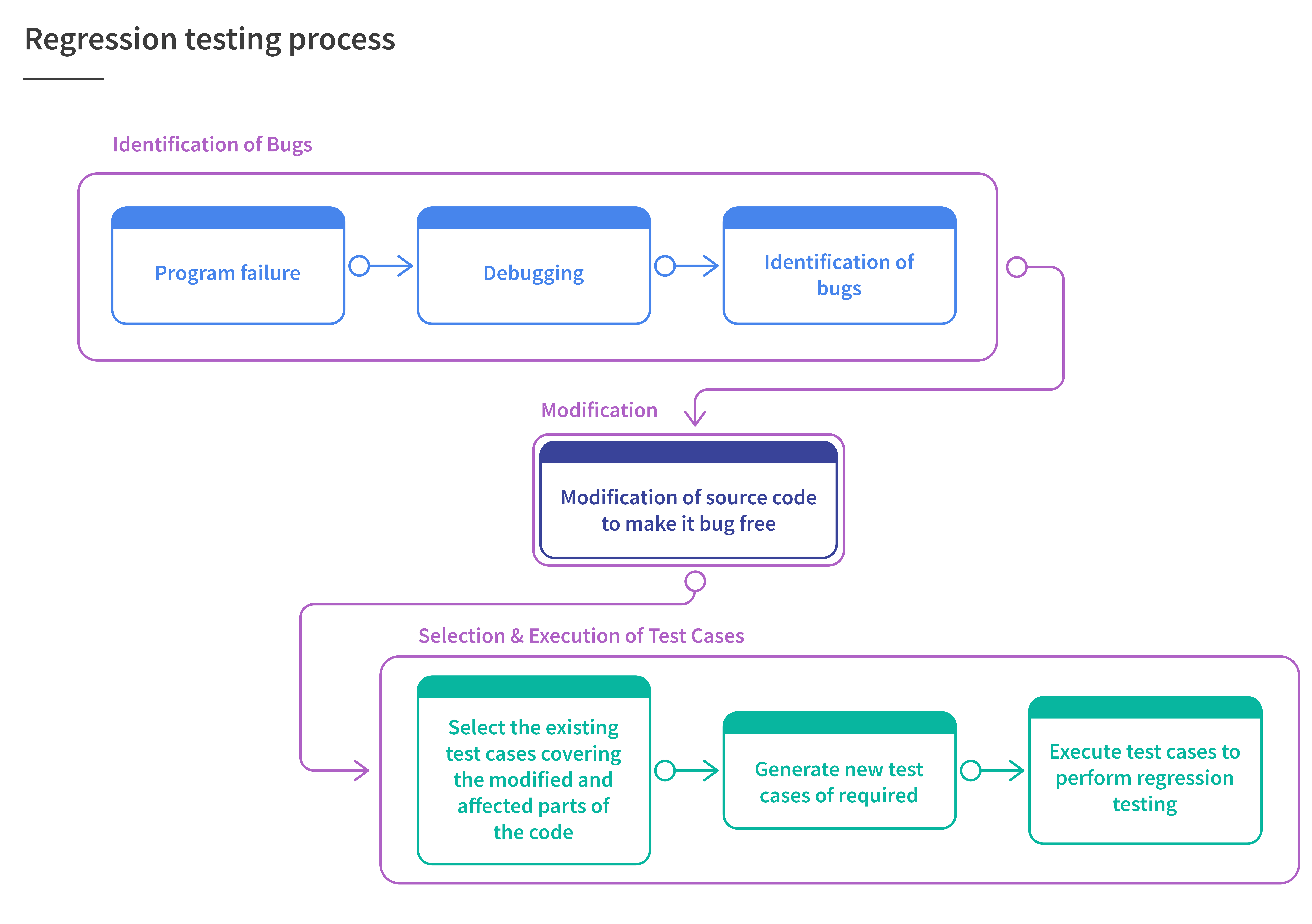 These tests can be executed automatically by continuous integration services such as Jenkins. Once we get the assurance that the build is perfect then we do the sanity testing to confirm that the functionality works as expected and known defects are resolved before conducting integration testing.

Integration testing is performed to verify that the units of the apps interact with each other and with backend services such as databases. The next step is to schedule regression tests depending on the size and the scope of the code either a partial or a full regression test may take place. 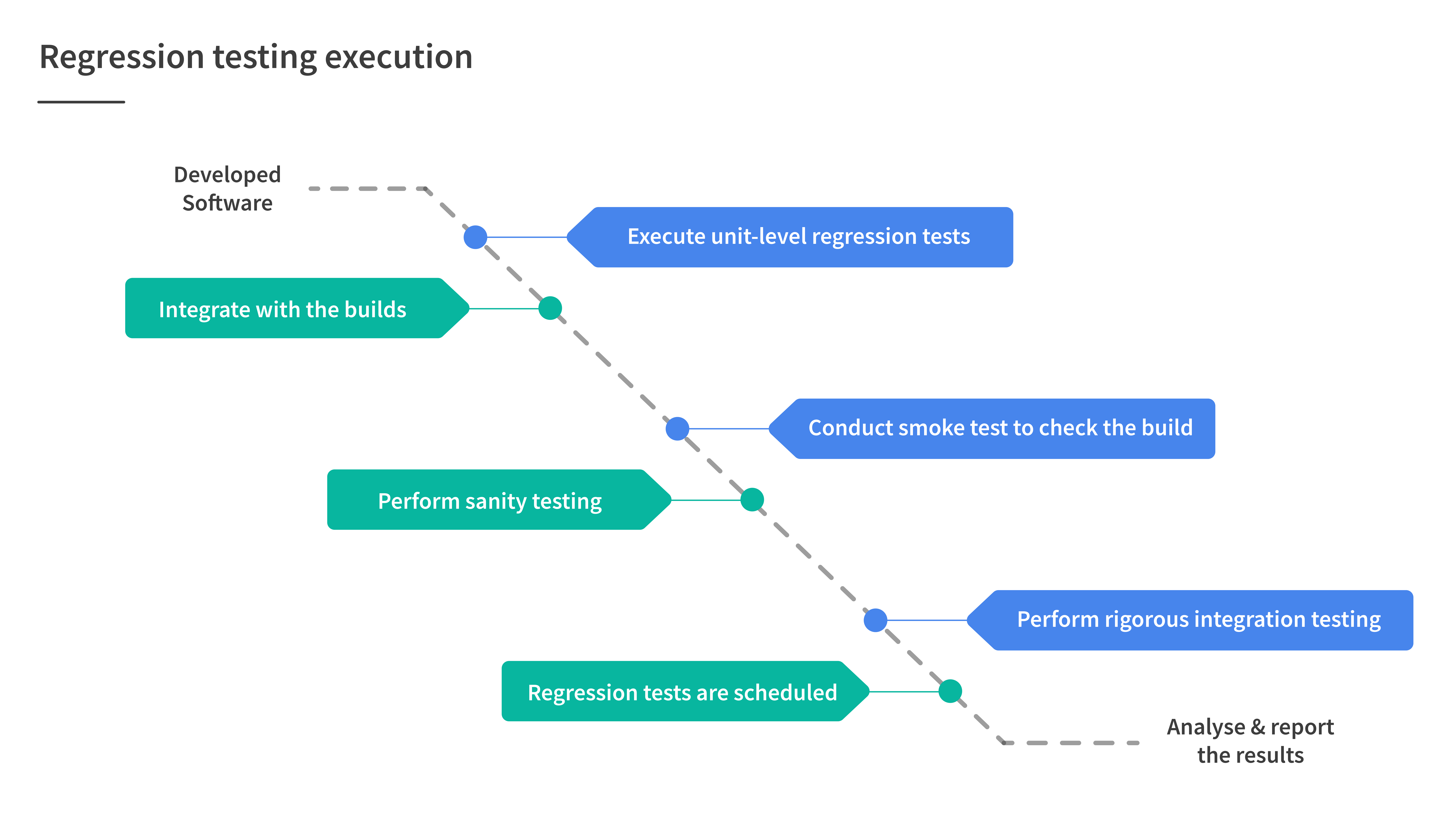 Defects are reported back to the development team and many require additional runs of regression testing to confirm the resolution. So based on the test reports you can analyze and figure out what test cases can be added for the next checking process as well and you create your report on that.

Cost is High
In terms of business expenses, the company will have to invest a lot of time and money in repetitive testing. Also, there’s no specific return on investment that is attached to regression testing. It is a complicated process and to explain the importance of regression testing in terms of business benefits to the management is really difficult. But this has to be done to draw the budget for the testing even though it is expensive from a management point of view.

Unstructured Information
If new testers are recruited during the ongoing software testing project, either to speed up the process or to release some of the tasks. The existing testers in the organization might not have time to give complete details about the functionalities and features of the app, existing bugs, delivery time, etc. The new testers might have to initiate testing with inadequate data about the ongoing testing project. Challenges like these need an appropriate test strategy for efficient collaboration.

Time Restrictions
The focus of enterprises is on developing quality apps and delivering them faster. This is why regression testing is always time-bound. Testers always get a deadline to complete the process of regression testing. To keep pace with time, The testers might have to take chances to give more importance to the critical regression tests and skip a few tests. It is a serious challenge as it is critical to decide which tests can be skipped.

Now that we are aware of the challenges in regression testing. Let’s have a look at the key changes we can do to enhance it.

Focus on the Frequently Used Paths
Frequently used paths also make the most frequent use cases for your app. They must include the most popular features and the basic functionality of your app. You should be aware of the core group of users and their usual interaction with the app features. The regression test cases must ensure that this core functionality is working as expected.

Update the Regression Pack Regularly
A regression pack is a collection of test cases that are performed when a new app version is released or if there are any new updates. The tests in a regression pack are created keeping in mind the app’s older version requirement specifications. Ad-hoc tests should be included in the regression pack to keep it up to date. You wouldn’t want to waste your time on tests to validate an old feature that is not included in the latest version of the app.

Create an Entry/Exit Criteria
The entry/exit criteria that we usually follow in the software development lifecycle can be implemented in regression testing as well.
As entry criteria, a fixed set of conditions need to be met like reviewing bugs and performing regression testing to fix those bugs. Exit criteria can be applied with a fixed set of conditions like making sure that all the tests are executed and no bugs remain unfixed.

Automate Regression Tests
Automating regression tests makes the process much more efficient and saves time and effort. Repetitive testing can make testers lethargic and testers might lose motivation. It also affects the quality of their work as the testing is repetitive. Automated regression testing will free up resources to work on the more complicated tests. When we use automation, the test cases along with the software can also be reused which increases the return on investment.

One option is to use a cloud-based app testing platform which will enhance the effectiveness of regression testing by many folds. There will be hundreds of devices to perform testing in parallel and features which complement regression testing automation.